It can be affirmed with completeness that the current city is the direct result of the productive system that arises in the second industrial revolution of the 20th century from its second half.

In the Japanese context, this revolution takes place at the period after the American occupation happened after the II World War, producing the demilitarization of the State and the restructuring of the Japanese industrial set towards manufactured products and new technologies.

After the intervention of the United States in the country and the change produced in its economic policies, the dependency on the agricultural and fishing exploitation is reduced and, although fishing will continue to be an important part of the Japanese economy and culture, its economic importance will be greatly reduced in favor of foreign trade and the technological industry development during the period known as the “Japanese miracle”.

During the decade of 1960 and until 1990 the country undergoes a social, economic and demographic growth without precedents in the developed world, positioning itself like one of the most important economies at world-wide level.

In this framework, Japan´s main city, Tokyo, grows following the steps of its European and American counterparts, designed at that time to consider the private vehicle as the main conveyance at the service of economic activity. The enormous demographic expansion and economic growth fill the city with vehicles and inhabitants, causing the congestion of the city, alarmingly increasing the levels of environmental pollution and leading to the current situation of saturation of the urban space.

Nowadays, in Tokyo’s metropolitan area live more than 37 million inhabitants, which makes it the largest urban agglomeration in the world with a population density of more than 15 inhabitants per km², which is why the city of Tokyo is immersed in a process of urban reform, towards a new model in which economic activities are developed around global values, focusing on the sustainability and habitability of the city.

In this sense the city offers good examples of solutions to the different problems existing in its streets, which are born from the advanced technological and innovative spirit the country reached after the specialization of its industry. Innovation is a key factor for the sustainable competitiveness of a city, the result of knowledge and creativity, moving towards fairer cities with the environment and its inhabitants.

In response to the high number of vehicles and the high levels of environmental pollution, during the last two decades, the Government has developed numerous policies in favor of public transport, electric transport (Tokyo is known as “the Electric City”) and the usage of the bicycle as the main transportation in the city center area.

Due to the large population, the use of bicycles was also a problem in order to solve the occupation of urban space, since the lack of it made it impossible to make surface-parking for cycles, which would congest even more the limited space available. Then, in this context and with the intention of carrying out the proposed policies through the construction of new infrastructures, the eco-cycling project arises. It is developed by the engineering firm Giken and consists of a set of more than 50 underground stores for bicycles, located, initially, in areas of special interest, such as transport interchanges, universities or large stations. 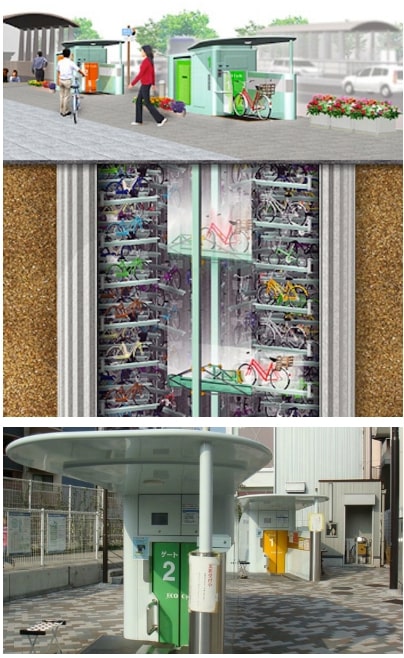 The stations that host the different bicycles are located in the middle of the street and look similar to a conventional kiosk. Although it looks like a small parking lot, under the station there are more than 12 meters of depth in which hundreds of bicycles can be parked. The capacity of each pavilion varies according to the location. The smaller ones, such as the one installed at the University of Kochi, have a capacity for approximately 130 bicycles, while the parking lot at the Suzukake metro stop has a total of 8 booths with capacity for more than 1,400 bicycles.

All those inhabitants interested in getting one of these parking spaces must pay the equivalent of 22 euros per month. After paying this fee, the interested user will receive a locator, called “Tag IC”, which adheres to the front of the bicycle. At the same time, the user will also receive a card through which he can recover his bicycle after depositing it in the parking. Cyclists can recover their bike in just eight seconds. 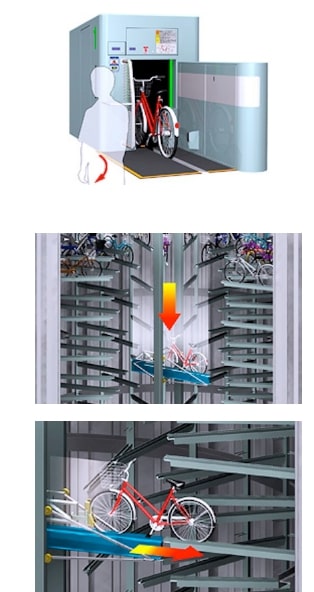 The system way to work is as follows, the machine reads the Tag IC of the bicycle and a slit is opened where the user has to place the front wheel, the vehicle is installed and a button is pressed, the door opens automatically and the bike enters in the cubicle. The door closes and the bike continues its way and automatically places itself in an empty square.

To take out the bicycle, the user must pass the card through the reader installed in the machine; the system locates the bicycle and raises it to the street, where the owner picks it up.

After the success of the firsts underground parking, private companies begin to incorporate them into their facilities to promote sustainable mobility among their employees, forming an example of how Japanese society, both public and private sectors, is aware of the problems Tokyo faces and acts as a whole to correct and prevent  them.