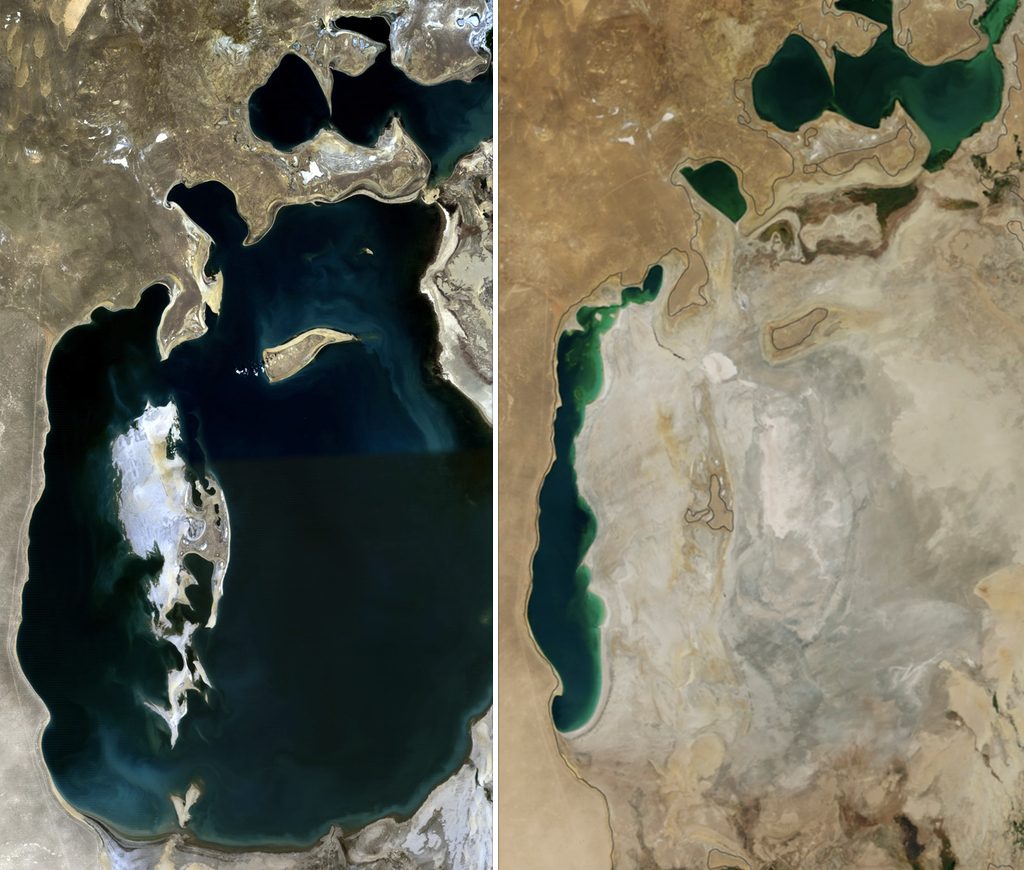 Nowadays we can still find world maps with the Aral Sea. Regarding this, we can stand out those maps with a hole and colour for large bodies of water on the border between Kazakhstan and Uzbekistan or, for them that are not good at geography, the sea next to the Caspian Sea. Moreover, we can also find more realistic world maps that show us a set of small and scattered lakes where the sea used to be. No wonder: the photo above shows how, what became the fourth largest lake in the world, reduced its 66,000 hectares of surface by more than 90% since the 1960s. But, how do we get to this situation? The answer is simple: A planning focused only on short-term benefits.

At the end of the 40s the Soviet Union suffered a series of droughts that caused the famine and the death of half a million people. In response, the Soviet government devised the “Great Plan for the Transformation of Nature”, in which they implemented land management policies centred on agriculture along the main rivers of the west and south of the USSR. This planning sought greater efficiency in the management of water resources, so pharaonic projects were devised as hydraulic channels, dams and large irrigation areas. Many of these projects were quitted after the death of Stalin in 1953 but, despite this, the idea of ​​exploiting certain areas with huge monocultures started to work.

This idea was especially prevalent in the Aral Sea area, where its warm position is good for rice and cotton crops. Furthermore, the great flow of the main tributaries (the Syr Daria to the east and the Amur Daria to the south) was believed to be inexhaustible by the local authorities (which received large amounts of aid depending on the agricultural production they obtained), so dams were built for regulate the flows and channels to transport water to immense irrigation. Taking this into account, such a number of projects (among which the main Canal of Turkmenistan, the Kairakkum Reservoir or the Kairakkum Canal, to name a few) were destined exclusively to transport as much water as possible, so it was impossible to waterproof them or avoid evaporations, making them especially inefficient.

On the other hand, all this drift ended with the creation of the “Ministry of Water of the USSR” in 1966, an organization with the priority of making the most of the land in a systematic way. His vision was to look for the largest volume cultivated indiscriminately: More cultivated areas, more pesticides, more irrigated work and so on. FAO estimates conclude that in that area between 1960 and 1980 the population destined as labour went from 14 million to about 27. Regarding this and according to UNESCO data, the area cultivated between 1960 and 1990 increased from 4, 5 to 7.5 million hectares. Obviously, this began to be noticed progressively in the Aral Sea levels, but the local authorities saw it as an opportunity to cultivate also those dried lands. It may be difficult to understand this little consideration for the environment, but at that time was one of the granaries of the USSR as well as a powerful economic engine and destination of great aid by the State and they were proud of it . 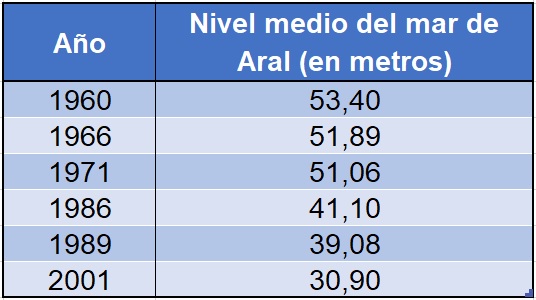 By the 1980s, the consequences of this policy began to be glimpsed: not only had the water level been reduced more than 10 meters, but salinity and eutrophication already caused serious damage between the fauna and the local population (as a curiosity, in 1980 the last fishing took place in the North Aral Sea). In 1982, limits began to be imposed on the use of water, but these proved to be totally inadequate and the levels continued to drop drastically. After the dissolution of the USSR in 1991 the situation was already seen as a natural disaster, so the existence of a committee formed by the Republics through which both rivers passed and the promise of international aid seemed to be the solution to the problem. Nevertheless, the increased demand for water, the poverty of the area (which could not afford to give up such a production engine), the differences between the Republics and the insufficient aid meant a new failure for the salvation of the Aral Sea.

At that time, the water that supplied the local population was salty and contaminated, not only by the enormous presence of fertilizers, but also by the presence of heavy and radioactive metals from military tests in nearby areas. According to FAO data, the province of Karakalpakia (where the Aral Sea is located) broke records in terms of natural abortions, births with malformations and infant mortality. The desertification caused sand storms and saltpetre that increased 3,000% the cases of acute bronchitis and 6,000% of arthritis, as well as diseases of the kidneys and liver (especially cancer).

Today there are actions that seem to achieve minimal victories that, despite everything, they offers some hope for the local population. On the one hand, the construction of a dike in the North Sea raised the sea level 3 meters, reducing salinity and allowing the reintroduction of some fish species. On the other hand, saxals are being planted in the desert that used to occupy the sea, these are a type of tree that reduces the aridity of the land. However, much remains to be done…

To conclude, the Aral Sea is an extreme case of the degradation that might include its destruction. To sum up , its a reflection of the disastrous consequences that a planning only focused on production may cause.