Since the first drafts of the Chamartin Operation project, covering the road in the Virgen de Begoña neighbourhood (located in the northern part of the station), has been one of the backbones of the idea. Covering these roads, a large increase in available land is achieved, creating a large area usable for other uses, thus generating a large number of new opportunities. The surface of railway tracks to cover contemplated in this project is greater than in previous proposals. This covered surface will eliminate the fracture that these roads entail, becoming one of the greatest green zones in this area of the city.
The buildability that at the beginning this project was going to have, has been reduced up to a 20%. 2.68 million m2 are developed, which will have residential use, offices, and will enhance the green, commercial and leisure areas. The development of housing in this northern area of the capital aims to reach the construction of up to 10,500 homes, given that it has a buildable area of 1,050,700 m2. Of these homes, around 2,100 floors will be officially protected. The City Council will manage another 1,900 apartments for social rent. Between the station of Chamartín, which will be completely renovated, and the Paseo de la Castellana at the height of the Cuatro Torres is where the tertiary use of offices and leisure will be enhanced, although housing will also be included.

The project includes the construction of 3 new towers, being one of them the one that will become the highest tower in the capital, with 250 meters above the Crystal Tower that reaches 249 meters.
Moving on to analyze the project from the point of view of transport, it can be said that the area of action is a well-connected zone, with a dense network of networks and knots, but this area becomes saturated in some cases. This fact could be amplified by the execution of the project, for this reason studies were carried out to assess the viability of this main operation from the point of view of transport. 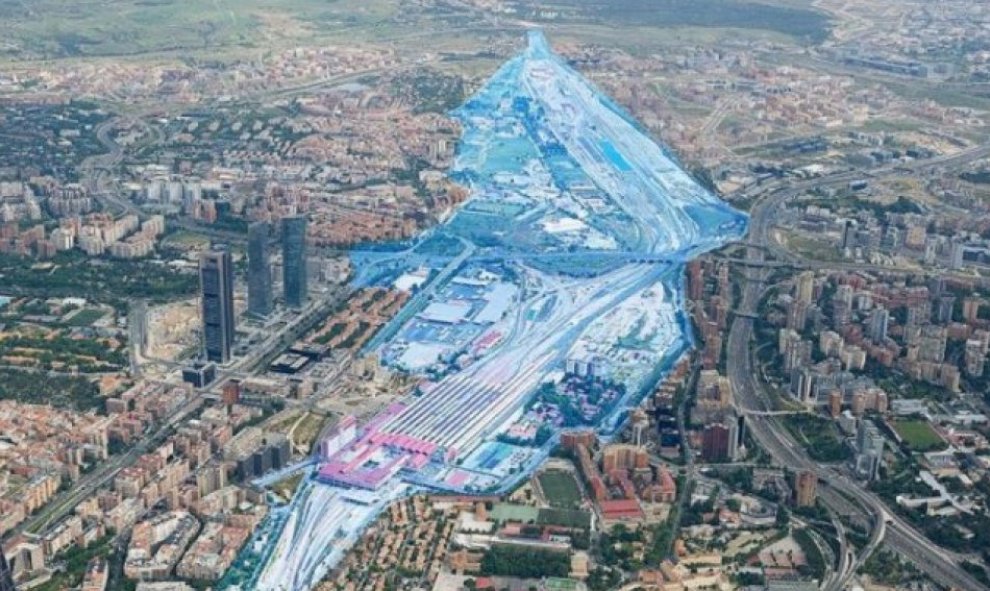 The association of Ecologists in Action, defends that the project generated numerous problems that could collapse the access roads to Madrid and overflow the capacity of the public transport network. This will bring an increase in pollution, emissions of greenhouse gases, … An evaluation report was carried out, and it stated that this project will cause the number of trips to increase up to half a million new daily trips, which will cause the saturation of the road infrastructures and the transport network, being able to exceed their capacity, as defends the association of Ecologists in action.

On the one hand, taking into account that the project will develop a large number of new offices, the “theory” is reinforced, stating that this main project will cause important problems in the transportation of the northern zone, since, when linking displacements to land uses, the office use generates more than twice the number of trips that generates the residential use. On the other hand, the project aims to promote commercial development, land use that generates up to 7 times more trips than residential use.
For public transport, according to the reports studied, the calculations indicate that during peak hours the public transport network would be exceeded.

Therefore, conclusions can be drawn from the effects of the project in different areas. The execution of the project will allow an important extension of different land uses, generating a large number of new homes, shops, offices, … which will bring new opportunities for the population.

This urban development will lead to an empowerment of green areas, seeking to achieve an environmental balance. However, the studies and reports carried out in relation to the effects that the execution of the project on transportation would have, show that, by generating a very significant increase in the number of trips that would take place in the North Zone of the city, this increase would come together with an increase in pollution, the emission of greenhouse gases, a greater noise … In addition, to causing significant co-management in the transport network, exceeding also the capacity of public transport.

In addition, as it has been already indicated, this project has the execution of 3 new towers, that would generate an important urban transformation in the area of action.