Madrid Central is an area of low emissions that began operating the 30th of November of 2018. This measure, the first of Plan A for Air Quality and Climate Change, will try to favour pedestrians, bicycles and public transport, which they will gain prominence and space also with the reform of streets such as Gran Vía or Atocha. The Centro district will become a lung for the city in the heart of Madrid.
These proposed restrictions only intend to put the Spanish capital at the level of other European capitals such as Amsterdam, Paris, London or Berlin, where vehicles that do not meet the emission requirements also have access limitation measures. However, Madrid has much more restrictive measures than the rest of European cities.

In my opinion, these are totally logical and necessary measures, since currently one of the greatest needs is to take care of the environment. These restrictions seek to promote public transport and the use of electric or low-polluting vehicles. Therefore, the circulation of the most damaging cars for the environment is reduced. In addition, these measures provide more space for pedestrians and therefore promote their accessibility and well-being.

AREA
The space comprised by Central Madrid is almost the entire Centro district, in which are the neighbourhoods of Palacio, Embajadores, Cortes, Justicia, Universidad and Sol. By implementing Central Madrid, the four existing residential priority areas (Letras, Cortes, Embajadores and Ópera) will be integrated in a new Low Emissions Zone, of continuous and intuitive perimeter almost coincident with the limits of the Central District, which will considerably facilitate the knowledge and understanding of the measure, both by the residents in the area and by the rest of neighbours and visitors of Madrid. 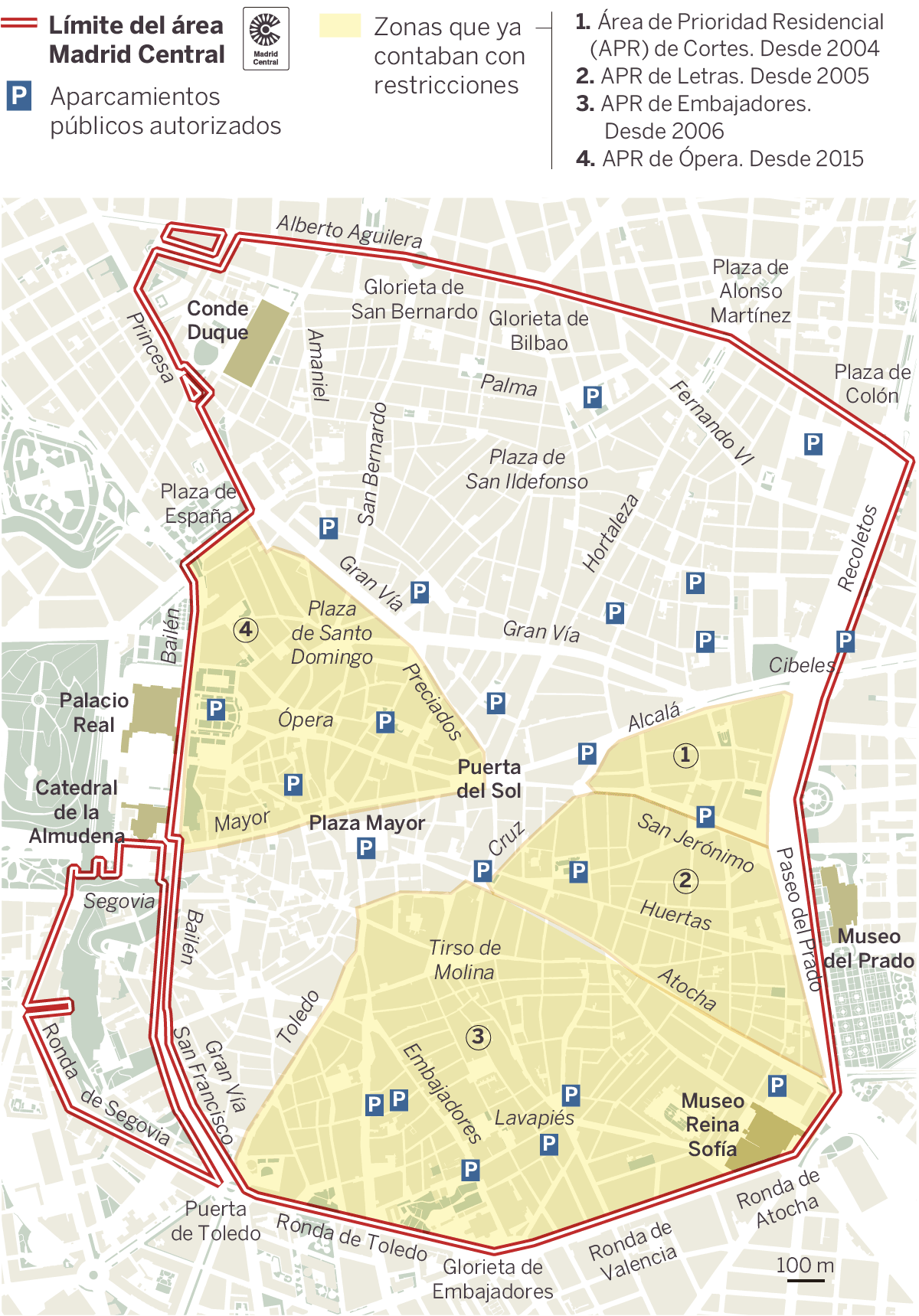 Access restrictions affect non-residents. In addition, within the exceptions, the limit of the environmental labelling of the Dirección General de Tráfico (DGT) is established to access under certain conditions. As a general rule, if you do not have a ZERO, ECO, C or B label, you can´t enter it. Among them, CERO corresponds to electric vehicles, ECO to electric and gas hybrids, C to engines with the European emissions standard for gasoline EURO 4 / IV, 5 / V or 6 / VI or diesel EURO 6 / VI; and B corresponds to gasoline vehicles EURO 3 / III or diesel EURO 4 / IV or 5 / V.º

Vehicles that do not comply with the restrictions can´t exceed the limits of central Madrid, signposted with vertical and horizontal signs.

In their 472 hectares, 37% of the current kilometres travelled and 40% of the emissions of nitrogen dioxide (NO2), a pollutant that affects health and whose levels do not comply with the regulations since 2010, will be avoided.

But the benefit of Madrid Central is not only cleaner air, also less noise and the release of public space to give prominence to people who live and visit the district in a more welcoming and healthy environment.

Central Madrid is being implemented in phases:
1) The 1th of November began an information campaign on external support and media, which will run until December.
2) The 30th of November, the Central Madrid regulations came into effect, with gradual and progressive application and manual controls of police and mobility agents.
3) In January the two months of the trial of the computer system for the management of fines in Central Madrid will begin. During this time, communications will be sent without penalty to people who fail to comply with the regulations. In case of reiteration, a second letter will be sent within 15 days.
I must mention that currently there is a large amount of information, both by the signs and lines drawn limiting the area, as police officers and staff willing to explain what it is and how these media work.

The City Council of Madrid estimates that the impact of restrictions on private traffic in the area designated by Madrid Central on the total public transport of the capital will be only 0.55% in the least of the scenarios and 1% in the largest.

The transfer of travel by car to public transport provided by the City Council will be a maximum of 35,862 trips per day, 14,345 of the EMT and 21,517 of Metro and Cercanías.

It is recorded that there will be 11,256 displacements that will cease to be carried out as a consequence of not complying with access restrictions by technology. The increase in demand for public transport in this case would be approximately 14,632 trips per day.

Regarding travel by transit, the EMT has calculated that approximately 8% of those trips will be transferred to public transport, the others will modify their current route.

The result of the maximum number of trips obtained by the City of Madrid is 35,862, almost null compared to 3,551,000 trips a day made last year in the three main means of public transport.
In spite of these data, society demands a greater service of public transport, mainly during peak hours, where there are many people who require its use.

In society we can find different opinions on this subject:
 Mainly the people affected by these measures are those who do not want to be carried out, think that they are unnecessary measures and will not work. Many of them only think about the traffic congestion that will occur and the longer they will have to use to reach their destination.
 On the other hand, we found many positive opinions in this regard, encouraging public transport is one of the best environmental solutions, also creating a more pleasant space, free of noise and pollution that would attract the inhabitants of Madrid and tourists.

Personally, I agree with the second group of people mentioned, which are the vast majority. Those people who are affected by these restrictions only have to change the private vehicle by public transport or spend a little more time on their trip. But this is worth it if this is achieved by improving the environment and the enjoyment of society in an area mainly for pedestrians.
CONCLUSION
With these measures, the main objective is to provide greater comfort to citizens and at the same time to achieve a place with less pollution of both nitrogen dioxide emissions and noise. Also providing pedestrians with more space for the enjoyment of the city