The initiative that was taken when building these new neighborhoods was for desaturate the center of Madrid and offer a better quality of life in a wider area and with various green areas and for the accommodation of the employees of the new offices that were going to be inaugurated in the Las Tablas neighborhood. But what they found the first neighbors who moved was a tremendous limitation in terms of services basic, being obliged to have a private means of transport to access these services.

This problem is caused by the waiting for a sufficient number of enumerations in the area to proceed to provide educational, health, food and sports and that this is profitable. The most consolidated neighborhoods that are Las Tablas, Sanchinarro and Montecarmelo no longer suffer from this problem, but Valdebebas to be the newest and who is in that process yes. 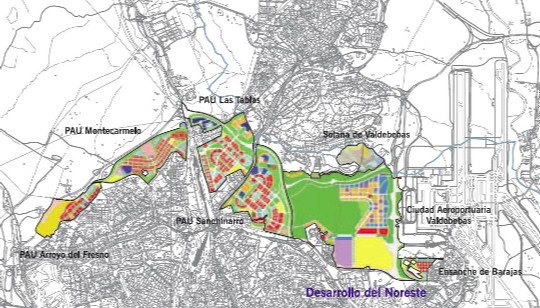 Las Tablas, on the other hand, due to the arrival of the facilities of companies such as Telefónica and the call La Vela of the BBVA bank, the number of inhabitants grew exaggeratedly leading to a very considerable increase in the price of housing and what is worse, to a funnel effect that leads as a consequence to jams in the Exits and entrances to the neighborhood terrible.

The solutions that have been considered by the Transport Consortium of Madrid is the modification of the route of bus lines such as line 172 and the 176.

In Sanchinarro, there have been innumerable requests that have been made for part of the neighbors to the town hall to enjoy their own sports center and after years the works have finally begun this month and will be located in the Oña soccer field. What leads to think that to be a neighborhood already practically consolidated are still late in providing decent basic services.

Something similar happens with the schools, which are overwhelmed and with lists waiting for the high demand and although new public schools were built demand is such that they have been insufficient, which has led parents to take their children to private schools – arranged. On the other hand, Sanchinarro has some bus lines, such as the 172 that connects with Telefónica and Mar de Cristal and a Light Metro line, lacking of Metro, this leads to poor communication and forces neighbors to use their own means of transport, which produces at peak or peak times a increase of 30 minutes of time to leave the neighborhood by traffic, as it adds to the jamming of the North knot (M-30 and M-11), therefore generates the funnel effect again, in Image 1 shows the exit of Barrio Sanchinarro by the M-11.

To this must be added the unforeseen problems that can occur to those who the neighborhood by having only two exits, one for the tables and another for the EMT, is not prepared and produces its collapse, as is the case of the tunnel at the roundabout located right at the entrance to the neighborhood of Sanchinarro by the EMT and that even after months of his appearance remains unresolved, giving his court at that roundabout and so which is logical, producing even more jams, in image 2 it is shown as find the sinkhole today.

Although not everything is bad since it has several health centers, schools both public and private, gas stations, restaurants and leisure areas, a large nursery for lovers of nature and even dog houses, and above all their extensive green areas, which makes the neighborhood attractive and spacious and clean.

Valdebebas is the neighborhood that is currently under construction, there is an enumeration of about 3000 inhabitants and it is growing as it are beginning to deliver the new homes that have begun to be made in the last 4 years. But these new neighbors again meet again with the problems that others have suffered, although this neighborhood, although poorly communicated, It has a suburban station called Valdebebas and metro.

One of the proposals that the neighbors have taken to the consortium to solve The problem of poor communication in these neighborhoods is to build a new subway line that passes through Mirasierra, Tres Olivos, Montecarmelo, Las Tablas, Sanchinarro and Valdebebas, although there is no news that indicates that it is being valued for now.

For all the above, it is concluded that these neighborhoods are quite promising, they provide a good quality of life without having to go to the outskirts of Madrid, aimed at families and employees in the area. What should be considered is the time that should be given to them to become neighborhoods completely consolidated and the inconveniences that this entails since it is difficult to provide a new neighborhood of services without inhabitants that make it profitable. Regarding traffic jams, Do you think that the project called Madrid Nuevo Norte which is already approved will influence this aspect positively?