I live in a city, and you? It is also likely.

In particular, a 75% of the European population lives in urban areas, amount, which, according to studies, is expected to reach 83% by 2025. Rural areas give way to urbanized areas, the natural environment, therefore, becomes in urban environment. Despite the numerous advantages the cities have, they also present disadvantages; the increase of population in a city produces saturation in traffic, or an increase in the harmful particulate pollutants, but also generates problems not so easily tangible for citizens, thus, I am referring to the sanitation storm water system. 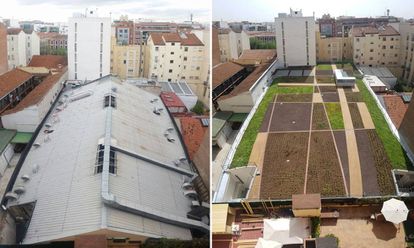 The imageshows how a vegetative cover improves the visual impact, is the transformation of one of the centres of Mercadona supermarket in the neighbourhood of Chamberí. The image has been obtained from the El País newspaper.

Naturally, the land is covered by vegetation, so that the water can follow a cycle closed through its infiltration. To urbanize a land, it will waterproof the area to build and this cycle is altered, the percentage of infiltrated water is minimal, while runoff increases considerably, producing, also larger caudal tip. Sanitation systems are responsible for evacuating the surface water (runoff), directing it to wastewater treatment, where they previously to be expressed; However, these systems can see surpassed its capacity, taking its point of spill-contaminated water directly. Always it has sought to make the collection of water in the fastest way possible, by ditches or pipes; but evacuation speed is not the only thing to take into account, they should be also assessed the possibility of doing so with some flow tip minors, adequate quality and service. So are the SUDS (Sustainable Urban Drainage System) adapted to Spanish depending on urban sustainable drainage systems; These are considered as an alternative or adjunct to conventional sanitation treatment system. They consist of natural filters that allow the penetration of water in the soil without dragging contaminants, avoiding at the same time pollute groundwater; in such a way to achieve that the hydrologic response of the waterproofed area is more like that it had in its original state, at the same time improving the urban aesthetics. Examples of these drainage systems are green roofs, filters, permeable pavements, green ditches, deposits of infiltration and retention… By its growing use in construction and restoration of buildings, as well as the good performance they are offering, I’m going to focus on green roofs or vegetal roofs.
Vegetal roofs serve the function of roofs on buildings, but with features that offers a sustainable drainage system, means of reducing the volume of runoff and tail tip. They are constructively, formed by a system of multilayer which encourages the growth of vegetation, therefore, besides General insulation systems that owns a building, must have four layers that allow the existence of such vegetation; These are: the barrier of roots – prevents the penetration of roots in the membrane insulation-, the drainage layer – controlled water retention-, substrate – provides nourishment for plant growth – and finally, the layer of vegetation – depending on the weather. The placement of a green roof, as well as its high price in comparison with conventional roofs, involves basic maintenance requirements characteristic in any garden area, either irrigation or pruning of vegetation. But, in Exchange, it will offer more benefits than the hydrological initial have a great capacity of elimination of air pollutants, improving the quality of the air, also the vegetation gets reduce noise, also reducing pollution acoustic, they help reduce the island effect of heat, very common in urban areas and give the city of a space for public use without occupying more than one space already built, at the same time that improve not only the aesthetics of the building, but also of the city in a whole.

Currently, this drainage system is the Spanish order of the day, Mercadona, one of the best-known chains of supermarkets, founded by the Valencian businessman Francisco Roig, suggests that this initiative wears underway in European cities from 30 ago years. In Spain, beginning with the introduction of plant in December 2015 roofs, in the centre of the Promenade General Martinez Campos, in the neighbourhood of Chamberí in Madrid Centre; year and a half later, in the same district, another Centre appears covered with a green roof, installing a 1,600 square metres of gardens in each; the company plans to build three gardens more in the coming months. In addition, also have chosen vertical gardens, such as the one that appears in the middle of the street Asura, all of them in Madrid. Prior construction of the gardens, according to Mercadona to El Pais staff, “the neighbours is explained and are made to participate in the plans of action, committed at all times to a dialogue that will allow smooth communication to develop a” common project”. And it is to these gardens, to promote the vision of its neighbours, as well as improving the quality of the air and moisture around them. As a note, the Capacis Foundation, dedicated to the inclusion of people with disabilities, is responsible for the maintenance of vegetation in a few covers that represent an increase in the cost of construction at about 300,000 euros.

Madrid city council, with the Madrid+Natural plan, promises the installation of gardens in 21 buildings and 11 municipal terraces, which unlike the built by Mercadona, yes it will be open to visitors. These will be installed in buildings such as the Palacio de Cibeles or the Casa de Cisneros. According to Inés Sabanés, the delegate of environment and mobility in the capital, aims to make Madrid “a city more beautiful, much nicer and much more attractive”, so get improve “their bio-climatic conditions”.

As we have seen, landscaped roofs (and in general the SUDS) are not just aesthetic works, but that in addition to meeting the main function of drainage, they combine a number of features that make these, very complete systems. We can say that engineering is not only functionality, talking about new concepts of work aesthetic+funcionality. The imageimage shows the aesthetic of these drainage systems plant power. It’s the University of technology of Nanyang, in Singapore, the image has been obtained from the newspaper Expansion.