The airport of Castellón has been one of the most important Spanish symbols representative of political connivance, which has led to the misuse of economic resources, spending millions of euros during the first decade of the 21st century in infrastructures of doubtful need.

The Castellón airport was inaugurated in March 2011, with a total construction cost of 150 million Euros, but could not be used until one year later due to a failure to obtain the operating license. In addition to the cost of construction and operation; the province of Castellón has allocated 30 million Euros in advertising, with the aim of promoting its use and justifying its construction; However, a recent study shows that only 11 of the 48 airports that make up the Spanish territory are profitable from the economic point of view.

The airport is located approximately 30 kilometers from the capital of the province of Castellón, and is close to other tourist centers of relative importance such as Benicassim, Alcocéber or Peníscola; but it is just a 15 minute flight from the regional airport of Reus, located north of Castellón.

It should be noted that many detractors of the project pointed out from a point of view not only economic, but environmental, since some environmental associations considered the land where the construction of the airport was executed had a high ecological wealth; The work came to a standstill on several occasions. Finally, the entire project was completed, and the result has been an infrastructure that has a terminal, a runway and take-off, and that as of 2017 has had an annual total of 144,221 passengers (with an increase of 36%). % of the demand with respect to the previous year). Currently some of the international flights that have as origin and destination this airport, fly to countries such as Germany (from 2019), Bulgaria, Poland, United Kingdom or Romania.

Next, a photographic one is included in which it is possible to be observed the airport seen in plant. 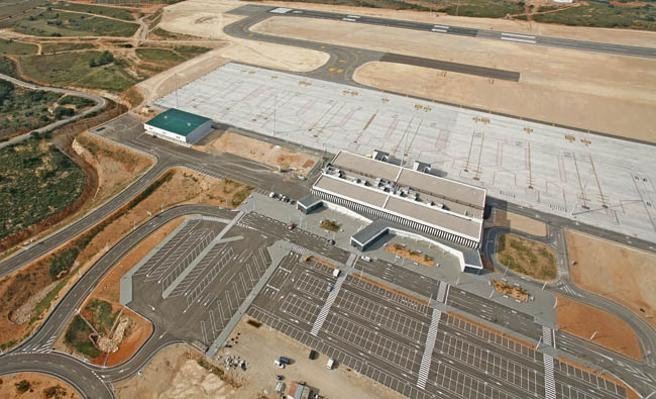 Attending to the principle, that by definition, resources are always scarce; I think that from the economic point of view, the decision to build an airport in an area that from a demand point of view is not justified, leads to an erroneous allocation of resources. In this way it can be observed that in the management model, when developing this infrastructure, a global vision of the territory’s needs has not been taken into account, since the allocation of resources could have been destined to infrastructure better utility and with greater demand. For my part, I consider that this type of infrastructure must be taken in a broader context that consequently leads to an efficient allocation of available resources; then, consequently, it would be necessary to question whether the current political structure of the state contributes to an efficient and efficient allocation of available resources
The deficit that will be in the future as a result of the low demand, will inevitably lead to its infeasibility from an economic point of view.

On the other hand, the proximity of other important airports (Valencia, Reus ..), or other infrastructures belonging to other modes of transport, such as rail transport (more specifically, the AVE line owned by ADIF, which will soon come into operation and will link Valencia with Barcelona); it would cover the seasonal demands that that coastal area requires in a timely manner in the summer months.
From my perspective I can not find justification for the realization of a permanently deficient project, without having had other types of solutions present.

There is no doubt that, from a point of view of territorial accessibility, the installation of this airport contributes to the development of international tourism in the coastal area near the airport; Some places like Benicassim, which previously had a mainly national tourism, can increase their international tourist demand thanks to this considerable improvement in the accessibility of the territory. As it has been observed, the advantages of creating an infrastructure of this category are undoubted, but often oversized and unnecessary, because from the point of view of efficiency, you can always find an alternative that, taking advantage of available resources, balances the exploitation needs and economic or environmental impacts; thus allowing to develop a more efficient type of engineering, and ultimately more sustainable.

From the perspective of efficiency, it would be necessary to question whether the current political structure of the state contributes to an efficient and effective close allocation of available resources.