In this article we will try to capture the impact that the construction of the Benínar reservoir, located in the province of Almería, had and still has today.

The dam was built in 1983, and this is the first point of controversy in this article. Given the location of this swamp, it had to flood the forgotten village of Benínar, forcing the local families to leave their homes. This first point to be discussed will not be criticized to a large extent. This is because this practice is common, and in many cases necessary. It may be that on certain occasions it has caused great problems, but since the construction of a reservoir is intended to help many people, it may be justified. The sacrifice of a few for the help of many. 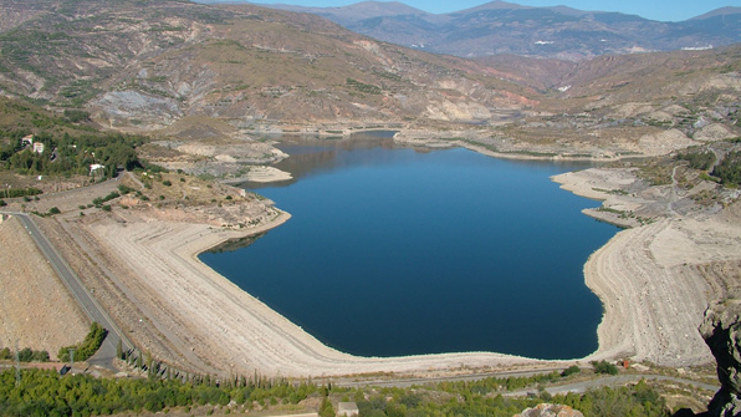 The second topic to be addressed will be the practical problems that, after 35 years, continue to appear today. These problems are leaks. Prior to its construction, the engineers in charge of the project warned of these problems. In addition to the landslides that were in the area, the land on which it was built was very permeable. The decision of its construction was purely political, so when they were warned of these problems, they were not made the biggest case, and therefore it was decided to go ahead with the work. The magnitude of this problem has been such that in 2008 it was decided to carry out an expensive study to try to solve the problem. The result was that some waterproofing screens were made, which mitigated the problem, but they were far from solving it.

The third and last problem for criticism is the motive and the dimensions of this dam. The reservoir was conceived to receive the transfers of another river in the region. Specifically, the Grande, Adra and Trévelez-Cadiar-Adra rivers. It may be that the problem of leaks was the reason why the reservoir never received such transfers, or may be for various political reasons, the result is that such transfers were never made. This left a completely oversized reservoir, which operates at a minimum level. The repercussion of having a very large reservoir is not simply economic. It is also necessary to evaluate the environmental impact that it can have on the environment and the natural barrier it supposes for the species. The construction of a dam is about an interaction with the environment, therefore, we must consider the environmental impact that may occur. A clear example of this is the dams in China. They fulfil their functions technically from an engineering point of view, generate an immense amount of energy thanks to their great leap and can supply large populations, but they are not acclimatized to the environment. They frequently destroy the ecosystem of the area and cause an environmental impact that can hardly be alleviated, as well as wreaking havoc on the populations of the area. In short, it is the example to everything opposed to respect for the natural environment.

Realizing, therefore, an overall vision in all the above, we will proceed to draw the conclusions of this article, which was the initial object. The problems of the construction of the dam were roughly three: the flooding of a town, the great filtrations that the closed one has and the reason for its construction. The fact of having gone ahead in the construction was a purely political decision. There have been similar cases in which buildings have had to be abandoned for this reason. The problem of the area is clearly the lack of water. The fact that due to bad decisions 35 years ago they still have problems today is a matter that could be described as even reckless. A construction that has large environmental impacts, which causes large losses of water and which in turn implies a large monetary loss should have important current alternatives rather than mitigating measures. The only current justification for the project, that the reservoir works at such low operating points, and is practically empty, could become the object of coping with major floods and storms, but it is not a big problem in the area, and So much is an excuse that it is not representative. Therefore, the final criticism is that this construction seems to have lacked enormously a pre-construction study, and that the first alternative that seemed a priori to be profitable for the problem of drought, such as the construction of a dam, has resulted be a catastrophe in all aspects.