Lugo is a city located in the center of Galicia, capital of the province of the same name, with a population of about 100000 inhabitants.

Like most Spanish cities, until the arrival of the economic crisis in 2008, there was need of places to build more and more buildings, all around the city.

During this time, for many, the environmental impact studies were a mere procedure, that the only thing that supposed was a waste of time that would delay the beginning of the construction, and consequently the moment to begin to make money. For this reason, in many cases these studies were ignored. As a result, today it is not uncommon to find urbanistic aberrations in most of the cities of the peninsula.

In the specific case of the city of Lugo, a clear example are the Garañon Towers, two buildings of great height located in one of the viewpoints of the Miño river that the city of Lugo has, causing that this one lost the views to the river.

O Garañón is on top of a slope. Next door is the Rosalía de Castro park, the largest park in the city, which extends along the same slope on which these buildings were located.

In 1991 the “Plan General de Ordenación Urbana” of Lugo was approved, in whose document it was granted buildability to numerous areas of the city of Lugo, and in particular, the one relating to the area of ​​O Garañón.

In 2005, the “Plan Especial de Reforma Interior” (PERI) was approved, which specified the form that would take the building volumes that would be built on that plot. The builder proposed for these plots a series of towers, instead of other options that would be less visually aggressive, and that would not obstruct the view from the viewpoint of the park. These options, which had a lower visual impact, were less interesting from the economic point of view. The local government approved the documents related to the buildings. In addition, in the agreement with the promoter, it was guaranteed that if the license grant was not successful, it would be compensated.

From this, the construction of the two buildings of the plot begins. In 2009, an association in defense of the Rosalía de Castro Park, which had taken the matter to the court, got the urbanization Project annuled, and the construction paralized. 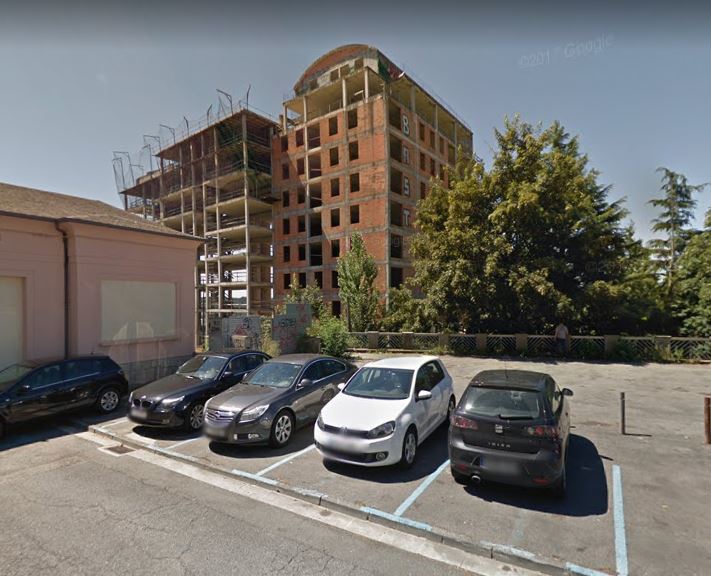 This paralysis is justified by the court arguing that in the granting of their licenses could have been committed several fiscal offenses, in addition to acting against the general interest.

During the following years a multitude of events related to these events continue: several sentences are issued that paralyze and outlaw the current constructions, proposing the demolition, or the construction of buildings that do not impede the views from the park.

The “Dirección General del Patrimonio” of the “Xunta de Galicia” appeared in the case as an affected part, making it clear that no consultation had been made on these constructions.

Throughout this process, no landscape or environmental impact study had been prepared regarding the buildings of the plot.

As it had been commented, the numerous sentences that exist on this case, have paralyzed the construction of the buildings and determined the illegality of the same ones. Consequently, these must be demolished or replaced by others that do comply with the proposed building volumes for the plot (those options that had been rejected at first).

The truth is that since 2009, the buildings remain in their position, breaking the visual harmony of the area, given the size of them, not only limit the views from the viewpoint of Rosalía de Castro Park, but also from the entrances to Lugo, you can see the buildings at the top of a hillside with only trees and green areas.

Everything points to the fact that the towers will be demolished, with a charge for the City Council of Lugo, a costly operation that the municipal government does not want to assume. But the fact that the cataloging of the land as developable is maintained (as it appears in the General Plan of Urban Planning of Lugo), causes that the disconformance of numerous associations is maintained, considering that it can become, once demolished the buildings , to the same situation with the construction of other homes that do agree with the provisions of the Plan. For this reason it has been proposed to the Council the possibility of carrying out a specific modification of the Plan that changes the cataloging of the land of urbanizable land to a general space of green areas and link it to the park next to it.

Fortunately, it is a problem that seems to have a solution because sooner or later the constructions will be eliminated. In view of the above, it can be said that several things failed. First, when the old general plan was approved in 1991, the cataloging of this land as urbanizable should have been approved by an environmental impact study, since being in a natural area, it might not be the most appropriate place for the construction of houses. Unfortunately, in those years, the growth of the city was more important than the preservation of green spaces. Secondly, when the licenses were requested, the constructive alternatives that were more respectful with the landscape of the area and not the most economically attractive should have been selected. Once again, private interests prevailed over the landscape of the area.