In the first decades of XIX century, the first steam-powered locomotives were used to develop railways. Modern railroads would start to emerge in the most developed countries of Europe (England, France, Belgium), and come to Spain in the 1830s for the first time with the opening of the first line of railroad of the country, Havana-Güines (Do not forget that Cuba would be an Spanish province until 1898). The November 19th, 1837, was present at the inaugural acts Miguel Biada, Catalan from Mataró, who promised that in his return to the mainland, would connect his hometown with Barcelona by railroad.

In 1840, Biada initiates the development of his project and by 1843 gets the government approval. To meet the financial requirements, the society joined Spanish and British shareholders. This is show the  “Gran Compañía Española del Camino de Hierro de Barcelona a Mataró y Viceversa” was founded.

The English engineer Joseph Locke would be in charge of drafting the project, and also, the British company Mackenzie & Brassey was assigned for the execution of the works. All under the supervision of Spanish civil engineers Juan Merlo, Víctor Martí, Agustín Marcoartú y Antonio Arriete. Joseph Locke had already designed several railways and had been selected for his designs reduced in costs by the used of low slopes, saving all possible landform with embankments and ramps. However, in the Maresme, on the route between Barcelona and Mataró, the capricious hill called “Turó de Montgat”, could not be bordered by the line, that ran stuck to the coast as possible. The solution was the construction of the first railway tunnel of the Iberian peninsula: The Tunnel of Montgat.

The original design of the tunnel, included a tunnel length of 135 meters, a height of 6.69m and a width of 7.25m, with a single track for both directions. Both entries of the tunnel were designed resembling castles, with columns at the sides simulating towers and the arch of the tunnel topped with battlements.

The works started before the arrival of the British contractor with local labour. Since the tunnelling technology was non-existent, works began on both sides with shovels and picks. The method used, was similar to the contemporary Belgian method or “método de Madrid”, since the granitic nature of the hill made unnecessary a special lift while the works were advancing. The arrival of the British workers entails the use of gunpowder augers to make faster the excavation. On October 8th, 1847, the two galleries met and the works to provide the designed height and width began.

At the request and suggestion from the nephew of Joseph Locke, the engineer William Locke, the tunnel was covered with a masonry vault, to avoid the effects of atmospheric influence.

In March 1848 the tunnel was inaugurated without the rest of the line, with a convoy pulled by horses, in an act in which the press and political figures were involved. Finally the locomotive La Mataró, in a long ceremonial trip, opened the Barcelona-Mataró line seven months later. The passage through the tunnel of Montgat was a source of excitement for the travellers.

The tunnel had to be modified in 1899 to install a second track, because trains of the final years of the century were wider than the trains used in the 1840s design.

However, the most important modification of the tunnel was during the Spanish Civil War. With the imminent fall of the city of Barcelona in the “Ejército Nacional”, the Republican Forces leave the city and its engineers and saboteurs blow up the tunnel on his way to avoid a persecution by train. The action does not destroy the tunnel completely, but make it loose eight meters from its length and the south monumental entrance.

After the Civil War, the tunnel was reconstructed functionally replacing the south entrance with a practical solution  made of reinforced concrete. The tunnel becomes property of RENFE  with the rest of railway infrastructure which was nationalized during Franco’s dictatorship. Today it is integrated into the commuter line “Barcelona-Mataró-Massanet-Massanas”. 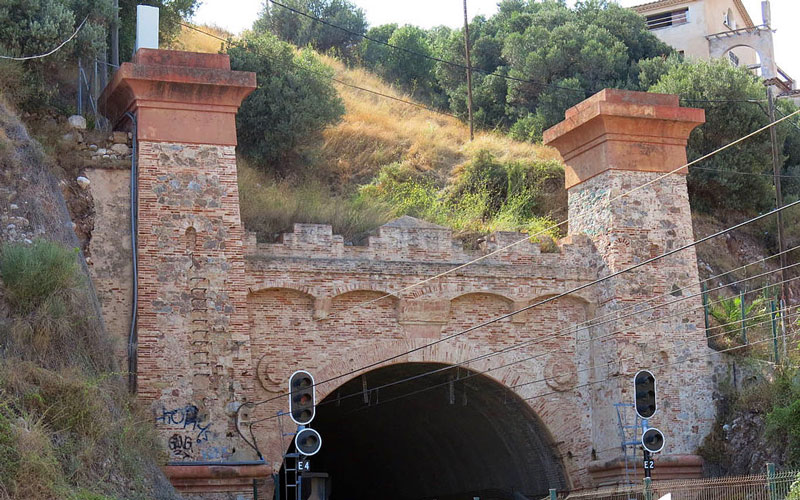 The Barcelona-Mataró line would be the focus of industrialization in the province of Barcelona, bringing in its successive enlargements wealth, technology and “the future” to the villages where stations were built. The railway infrastructure was shared with power lines, telegraph and before, telephone.

The tunnel of Montgat, and the railway, were the precursors of a whole development stage in Spain, where large railroad companies all over the country were stablished. In a few years, Madrid-Aranjuez and Gijón-Langreo were constructed.

Although at first the technicians had to be necessarily foreigners because of the lack of knowledges of Spanish engineers, but soon Spain was able to form in these aspects their civil engineers, beginning a long tradition that along with the difficulties and peculiarities of the Spanish geography, would bring improvements in technology and design in our country.

In conclusion, it would be necessary to emphasize that not all cultural heritage must be seen from the artistic point of view about beauty. Not all monuments are palaces or cathedrals that anyone could understand as that. The Montgat tunnel, is a monument to the human struggle to dominate the geography and orography, to bring the progress, to civilize …

The tunnel of Montgat has witnessed great events of history, but must be highlighted by itself, like so many other forgotten infrastructures, for the technics and difficulties related to its construction and the change that led to their region, their country and the mentality of the people who lived at the same time of its construction.

Today we are used to traveling by roads and railroads in very long tunnels, and we are not aware of what led to design and construct those first tunnels, that were something new and revolutionary. That is why I understand the Tunnel of Montgat as part of the heritage of civil engineering.

All Images were first published under Creative Commons license.