Visited by thousands of people annually, its image is exposed as a tourist attraction and a symbol of the Bierzo Region . Las Médulas, the most important gold mine of the Roman Empire, where natives and slaves suffered one of the biggest oppressions known to get the precious mineral, is today, 2.000 years later, a source of prosperity for the area.

To this end, they had to design and build complex and long canal system through tunnels. They shaped the rocks to reach the place where it was stored, for subsequent use.

In 1997 Las Médulas are declared World Heritage by the UNESCO, with Regime Protected Natural Area. They are also included within the Natura 2000 network of the European Union as a Special Protection Area for birds (SPA) and Site of Community Importance (SCI).

Nowadays, from the viewpoint of Orellán, visitors can appreciate the surroundings and visual effects resulting from the performance of the Romans. The view is breathtaking: a mountain of crumbling red earth full of whimsical shapes, chestnut trees and gentle slopes. And in the background, like a magnet to the eye, it is a quarry opencast. 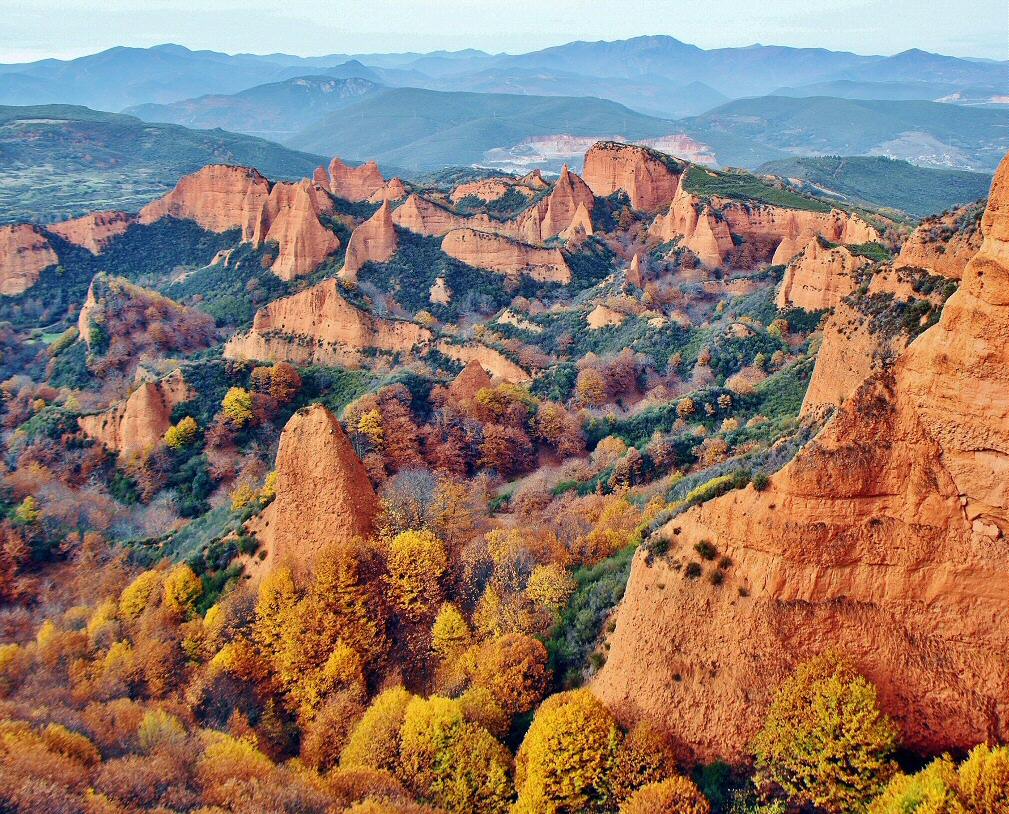 The quarry, focus of study

The quarry limestone open pit, is located within the Las Médulas area. The quary began to explode in 1968 , occupying , at its maximum performance over 68 hectares of land.

Since 1997, the activity of this quarry has been developed without regard to procedure Environmental Impact Assessment and without environmental license, in violation of any law of an environmental nature that governs in the area since it is in the protected environment area of Las Médulas.

Besides the very striking and noticeable landscape affection seen from the viewpoint of Orellán, the occupation has negatively affected in the woodland and associated species and the loss of vegetation, thus reducing the degree of consolidation which favors erosion on land. In addition, the sediments carried by air and water to nearby streams, have altered the river environment and the bottom of rivers.

However, after many struggles by environmental and tourist groups in the area, in March 2015, the Development and Environment Department of Council of Castilla y Leon issued an unfavorable report on the Environmental Impact Assessment (EIA) for reactivate the mining project, because of the incompatibility of the activities in the quarry with the valorization of the archaeological zone of Las Médulas. In addition, the EIA considers that the operation does not ensure the absence of disease to public water, besides causing significant degradation processes destruction of vegetation , direct discharges, tows erosions and the existence of zones of deposits discharges.

The environmental and tourtist groups, satisfied with this decision, are now calling for a rehabilitation plan to recover all affected by exploitation and thus restore the great “quarry crater” which is seen in one of the most tourist areas of León.

Finally, we want to point out the following question: What is the difference between the performance of the Romans and this new quarry? Why do you admire in one case and a negative impact on the other?

In both cases we are talking about mininig operations that totally destroyed the ground in order to remove material. On the one hand, the economic importance of tourism and the value of Las Médulas interesting to note is the landscape, thanks to the time and nature have been improving. But the merit is not in the landscape but in the great work of engineering, in both its conceptual plot and the methods and systems used to run, that carried out the Romans more than 2000 years ago.

On the contrary, the quarry limestone has not this merit, it is only the result of the exploitation of a hillside for constructive purposes. It is necessary then, after getting their exploitation is paralyzed, consider making a recoveration the environment.

All this makes us reflect on the need for restoration after an action of man in natural areas, to recover the destroyed landscape.

Therefore, facing forecasts of development in the future, it would be essential to carry out a recovery plan in the area. In addition to a prevention plan for other possible future impacts, such as the massive influx of visitors, deforestation by forest fires or the protection of the archaeological remains, as the rock-cut aqueducts.