The railway line La Fuente de San Esteban – La Fregeneda – Barca d’Alva, at the border between Salamanca (Spain) and Portugal, is the only European railway declared as “Bien de Interés Cultural” in the monuments category. The 22nd November 1999, the Ministry of Education initiated proceedings to declare the railway line a “Bien de interés cultural”, signing at last the Spanish Royal decree on the 24th November 2000. 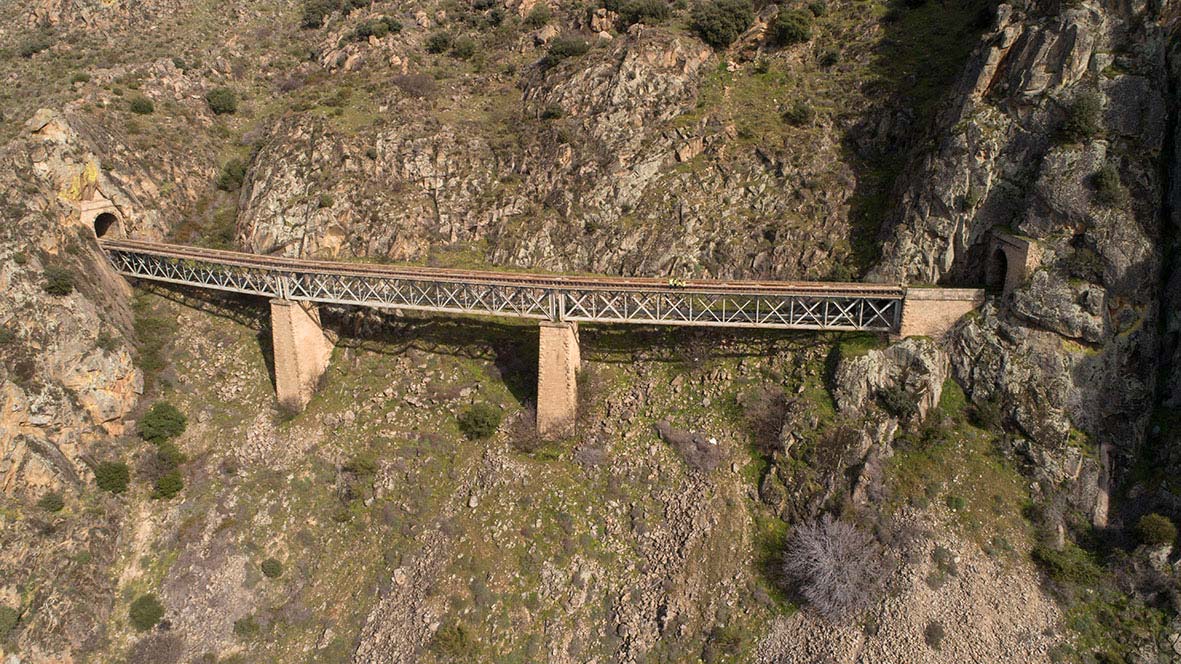 The last 17 km, from La Fregeneda International Station to the Portuguese border at the river dock “Vega de Terrón”, are the most spectacular ones. With its 13 bridges and 20 tunnels, it is one of the biggest railway engineering prodject in the Iberian Peninsula. Joining it to “Los Arribes del Duero”, “el Morgaéz” and “el Águeda” beautifulness, all together make a landscape with beautiful panoramic views and unique historical and scenic attraction.

This line history started in 1864, when the Spanish-Portuguese commission for the international connections added it within its proposals. It was an ancient claim from the Porto financial and market circles: the construction of a railway between Porto and Salamanca and its connection to Medina del Campo in order to be able to export their products to Europe through Hendaya.

Works began in 1879 in the Portuguese side and until 1882, works didn’t start in Spain. The line was concluded and in service the 8th December 1887. Constructed mainly with Portuguese and French resources, the operating profit never was a great business. Due to this line and the others in the area complex financial situation, Spain proceeded to their seizure in 1920, creating for their operating “La Compañía Nacional de los Ferrocarriles del Oeste de España”.

After the Civil War, in 1941, the company was built into RENFE which grouped all the private companies that operate wide rail gauge tracks in Spain.

As we said before, the last section between Fregeneda and Barca D’Alba was the most difficult one in its construction because it was necessary to build an authentic alpine line: it goes from 527 m high in La Fregeneda Station to 133 m high Barca d’Alva Station in 17km length. There are thirteen bridges in the line and one of them is attributed to the Eiffel school: the one which cross the Poyos river. There is another bridge in a curved shape (set up with three straight sections) which in its period was the longest one in its kind in Europe. These, joined with the 20 tunnels, 300m radium curves and 21 thousandths slopes, fact that it is a gigantic construction.

The rail was compounded by 8 metre long bars of 32.5 kg per linear metre which was produced by Krupp between 1882 and 1885. Still today, it can be seen this rail mostly in the entire track. In the section Hinojosa de Duero-Barca d’Alva, the rail was replaced with a 45kg linear metre one during the 1920s with a French rail and the 1960s with a Spanish one.

Without including sewers, retaining walls, cuttings, drainage systems, switchmen’s huts among other constructions that are kept in place despite the fact that it has been closed for 30 years. Moreover, it hasn’t received any maintenance treatment for a decade, so it is in a ruinous state and exposed to all kind of acts of vandalism.

Railway, in general and in this particular case, had a essential accessibility role and a great power to organise the territory. It eased cultural and economic exchanges and moderated the far west territories distance to the greatest economic and politic power cores.

It was maintenance during a hundred years with minimum investments for its operation and despite the “Bien de interés cultural” declaration, during many years this construction was pushed down into an absolutely abandoned by the administration. In this century, when some reliable initiatives tried to reopen it as a touristic railway, the crisis ended up with them.

In 2001, the “Tod@vía” Association was founded with the goal of preserving and restoring the railway. As they said, “the Spanish and Portuguese people who formed the Tod@vía Association find in this railway line a great economic potential which could favour a deserted and disadvantage rural area as “la Raya Hispanolusa” is”. There were always people with the strength and energy to fight for the reopening as a touristic line. With this aim, there are constantly programmed journeys to clean and maintain the track.

The track singularity, the engineering constructions, some of them truly masterpieces, the spectacular landscape, the unique morphology of Duero and Agueda cannons make that this railway line and its surroundings have a touristic potential. This potential is, till now, absolutely unknown and non-existent, except for a few ones.

The commonly known as “Línea de La Fregeda” is one of this railway lines that fell into an absolutely forgetfulness in spite of being one the most beautiful, astonishing and impressive railway infrastructure in the whole Spanish rail system. 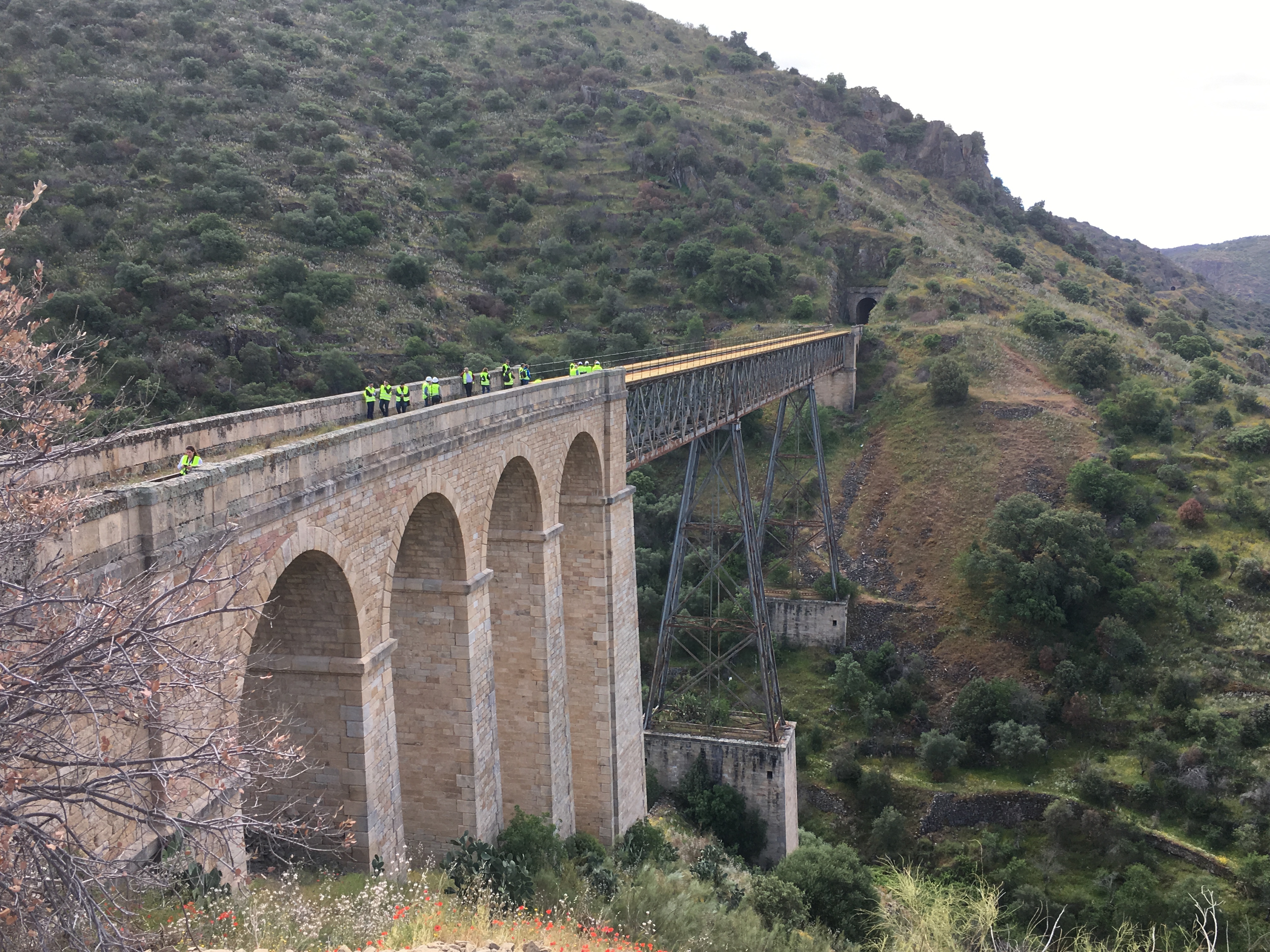 The investments to start it up are enormous and the profitability has to be proved. However, an immediate intervention is essential from the administration in order to stop its progressive destruction and death away into silence.