Rivers are, have been and they will be for sure key elements in the origin and development of cities, as they are an important source of water and food and they act as a comercial and cultural link.

So rivers can play a crucial role, but they also constrain the growth of cities and define the urban landscape, an idea that has been ignored for much time. We can see, throughout the evolution and history of many cities, how society understands its presence merely as a defensive element or even as a barrier among different parts of the town.

The city of Cordoba, in Andalucia, in the south of Spain, is a clear example of that. We can perceive, for each period of its history, a different relationship between river and society: for the first settlement that took place, called as Preroman Corduba, in Bronze Age, Guadalquivir was a essential source of water to survive, whereas in the Roman period, Guadalquivir acted as an important commercial connection with other civilisations. It is noticeable how Muslims integrated Guadalquivir in the city: it was a crucial element for the economic of Cordoba as it allowed  the development of an industry that took place in the many mills we can still see in its shores. It was important for commerce too. But it was also a place that reunited the population around and created a cohesion among different parts of the city. In this period, Cordoba, the capital of the Caliphate, reached its peak. With Muslim expulsion and during the Middle Age, Guadalquivir was separated from society and was simply perceived as a defensive element. The definitive isolation of the river happened in the 60’s, in the 20th century. On one hand, two big walls were made in both sides of the river to protect the city for frequent floods. On the other hand, the growth of population and the creation of the quarters of Miraflores and Fray Albino in the south side of the river led to the construction of San Rafael bridge and the continuation of the road N-IV through the “Paseo de la Ribera” and “Ronda Isasa” turning Guadalquivir riverbank into a side-street. 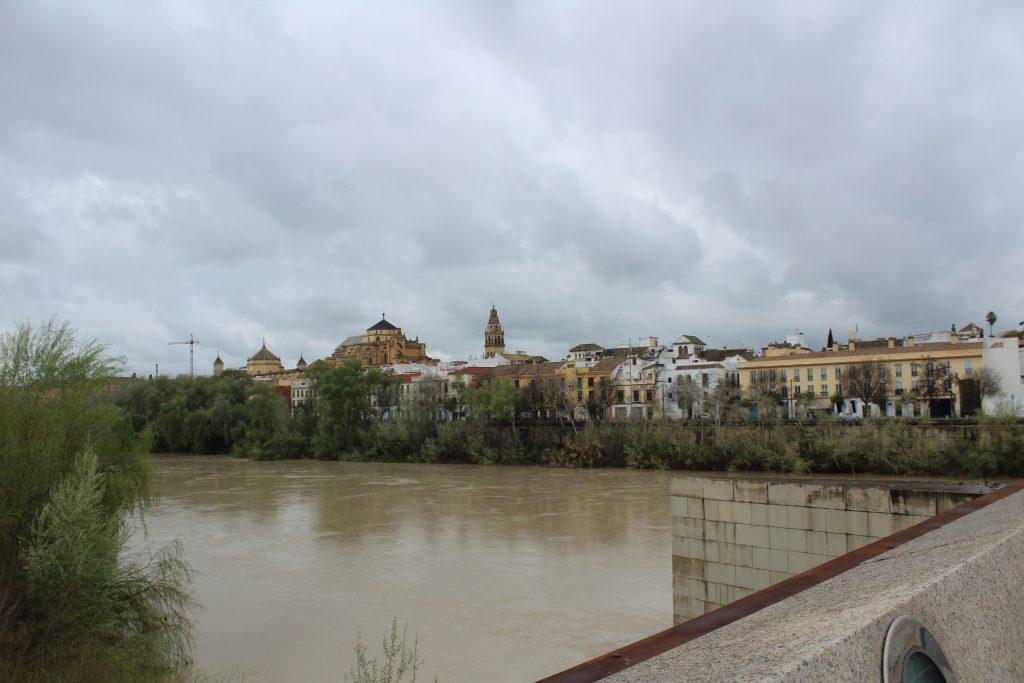 Nowadays, urban and territorial planning understand the importance of integrating rivers in urban areas. Guadalquivir isolation is one example of what has been happening in many cities in and outside of Spain; many projects have been developped during these years to reconcile rivers and towns: Madrid-Río, the creation of park Turia in Valencia, and the project around Guadalquivir in Cordoba which we have been talking about.

In general terms, these projects consist on the improvement of quality of water, the elimination of barriers between city and rivers, the cleanliness of riverbeds, restoration of buildings or other elements of the cultural-historical heritage. Working on this direction provides a new clean, green area in downtown.

Guadalquivir integration in Cordoba consisted on the substitution of walls in both shores for slopes with a subtle inclination to provide the necessary space for the swelling of the river. These slopes are covered with bushes or small trees, and above them, we can find paths to avoid erosion at the same time as they allow the access to the riverbank. The project also included the restoration of Roman bridge and watermills, and the creation of new spaces: the Balcón of Guadalquivir, the park of Miraflores and the fairground of Arenal (this place was a tip before).

Reconciling rivers and cities involves the creation of new, green areas that reduce visual and acoustic impacts; we also have to consider that these integration and adaptation projects are related to other projects to renovate urban transport systems. In Cordoba, remodelation of river shores led to the prohibition of vehicle traffic along Paseo de la Ribera, the elimination of car parks and the restrinction of traffic in Ronda Isasa, allowing only buses, taxis and residents to travel through it. This transport regulation has reduced traffic jams as well as pollution in town.

Finally, with these projects we also create a ecological corridor, which connects different protected areas or areas with environmental interest. This avoids the fragmentation of biodiversity and obviously protects it. With the elimination of walls and the adaptation of its shores, Guadalquivir turns into an ecological corridor, for the living of more than 120 bird species, many of them protected, that either they are permanent in Sotos de la Albolafia, or stays there during migratory movements.

All in all, the immersion of rivers in urban areas implies putting in value the ecological, environmental, historical and cultural importance that is related to them, the creation of new spaces available for citizens, and the reduction of most of the negative impacts that affects cities nowadays. These goals were all definitely reached, as has been illustrated, with the project of integration and restoration of Guadalquivir riverbanks in Cordoba.