The car is the most used transport system in Spain, and in general in developed countries, currently most cars (about 90% depending on the country) are internal combustion, ie gasoline or diesel. Another problem is that the car is used individually, these problems make the transport system the least effective (ecologically speaking) in the short distance routes.

Internal combustion cars are ineffective because of the great impact they cause on the medium. The main impact is the emission of large amounts of pollutants. Gasoline vehicles mainly emit carbon dioxide (CO2), nitrogen oxide (NO2), hydrocarbons and lead compounds, and diesel vehicles emit particles in the form of soot resulting in black fumes, unburned hydrocarbons, oxides Of nitrogens among other pollutants. [1]

Another impact is the emission of noise from the engines. The result is a much more polluted city, as much by the emission of the polluting gases and particles, as by the noise emitted by the cars. We also have a worse use of the car because this is an individual transport system, since 95% of the time the car is stopped.

Another problem that can be mentioned is that, internal combustion cars are composed of thousands (between 75,000 and 90,000) of parts, which makes their manufacture and subsequent maintenance is much more complex. [2]

The solution to these problems opens a new market and area of investigation, rethinking the concept of car both in the way of manufacturing them (moving from a much more noisy internal combustion car and contaminate a much quieter and environmentally friendly car Environment) and the meaning it has for the owner (from a private car to a shared car).

And it is in this area that the two companies of electric and shared cars emerge and burst, with enough force, Car2go and emov. These companies operate under the German company Daimler AG (car2go) and the French company PSA Peugeot Citroën (emov). [3]

Car2Go and emove consists of a service of electric cars shared and scattered throughout Madrid capital (within the ring road of the M30), to which anyone (over 18 years old) with the driver’s license (type B) has access by paying a quota per minute or per day.

The development of this service would solve the problems of pollution in the city and allow us to make a much more effective use of the car.

This service is already being implemented in the great cities of the world with great success, and this entails two consequences:

The first idea affects urbanism, that is, it rethinks us the idea of ​​the concept of the car, moving from an unsupportive, very inefficient and very complex personal car to a car that is much more sustainable, efficient and simple. The shared car along with a good public transport system can solve many problems of the city.

Although the individual car would not disappear, it would drastically reduce its number, as it would move to a car reserved for long distances and family travel.

The speed of transition from the individual car to the shared car depends entirely on the mentality of the society and the concept of the car, since the car has traditionally been considered as an indicator of the owner’s status, which could hinder this transition.

The second idea, which is the one that concerns us, is the ecological mobility, being electric cars the cities would be quieter and the air much cleaner.

Now, the problem of pollution is not solved by moving the problem from the city to the place where electricity is generated, it is not possible to use electric cars and presume not to pollute, so to be more consistent and get the electricity clean, through renewable sources.

We must keep in mind that to depend only on renewable energies, we must not only produce energy cleanly but also we have to optimize the consumption of that energy to the maximum. And at this point the electric car has a great advantage over the combustion car, since the engine of an electric car has a performance of between 80-90%, while the combustion car at maximum reaches a yield of 30%. [4]

At this point a big question arises: Can one live only with renewable energies? Well, the answer to that question is not simple and we will try to answer that question:

The following graph shows the origin of the generation of electric energy in Spain: 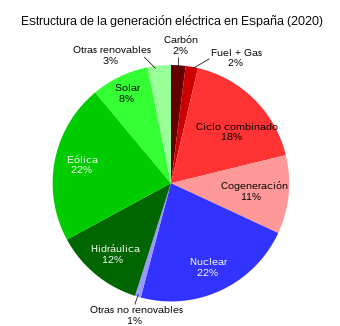 What are the renewable and potential energies?

In the following image you can see that the global power demand in 2009 to cover all the energy needs of the planet has been 16 TW (1.6 • 1013 watts), and you can also see the theoretical power that can be reached both from renewable energy such as non-renewable energy.

Clearly the solar energy takes advantage of the other energies, therefore the investment has to be made in solar energy, taking into account also the other renewable energies.

In addition, the following table shows the power supplied per surface of each of the different energies:

Figure 3. [7] Once again the solar energy is the one that best takes advantage of the terrain.

The question that follows is: If solar energy can cover all the energy needs of the planet, why is it not being used?

The truth is that if it is being used, companies like Tesla, led by Elon Musk (co-founder of PayPal, Tesla Motors, SpaceX, Hyperloop, SolarCity, The Boring Company and OpenAI) are investing heavily in solar energy. Facilities such as solar panels and batteries on the Hawaiian island Kauai, and also inventing a new tile that works as small solar panels. [8]

One of the main problems is the high cost of this energy with respect to the other energies, in the following table it is possible to see the cost of the KWh of each energy:

Another factor to take into account is the political will to carry out such projects.

There are also large companies, even countries, that slow traction to clean energies. In fact the big motor companies are not interested in making the change to the electric motor because of its simplicity and therefore easy manufacture.