The subject to be dealt with in this post will be the malpractice that has taken place in Italy, namely the collapse of the Genoa viaduct in August 2018, and the influences it may have both on our profession and socially.

Designed by the Italian Riccardo Morandi, the Polcevera viaduct was located between the districts of Sampierdarena and Cornigliano. It stood out for having a length of 1182 meters, a height of 45 meters and a length of the main span of 210 meters, it was precisely this span that collapsed, not due to its design, but to its deterioration linked to the same technology used in its construction in the sixties. But the subject to be dealt with is not going to be the little investment for the maintenance of bridges that is being made in Italy recently and which has been one of the main reasons for the collapse of 10 bridges in the last 5 years, but rather something more relevant and which should be a wake-up call both to our neighbouring country and to ourselves, and it is that it has been the mismanagement of the territory that has led to an increase in the number of victims. This is due to the fact that habitable buildings were located under the bridge.

In order to get an idea of the magnitude of the catastrophe, we will make a brief list of the consequences produced, it caused the emptying of about thirty cars and three trucks, 311 families had to be evicted and 38 dead.

It should be noted that although the data are very negative, it is also true that bridges over houses are no longer being built, that construction and maintenance techniques have evolved a lot since the mid-sixties and that the risk of a similar disaster with a current bridge is much lower, but there are still cases such as the viaduct of the A7 motorway over Martorell in Spain, which passes over homes and another bridge, in which it is necessary to act, not only for an obvious reason of danger in the event of any mishap, but also that no habitable building under a bridge can be integrated urban and territorially in a city of the twenty-first century.

The following images clearly show the before and after of the affected area and its repercussions. 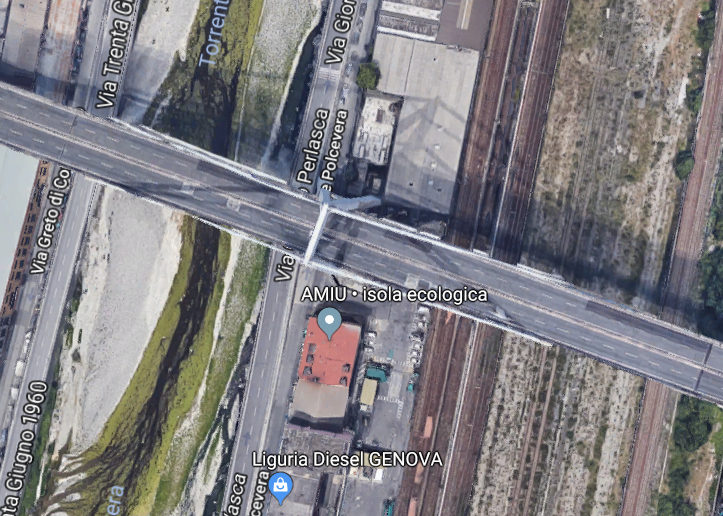 Illustration 1. Genoa Viaduct before the incident. Source: Own preparation 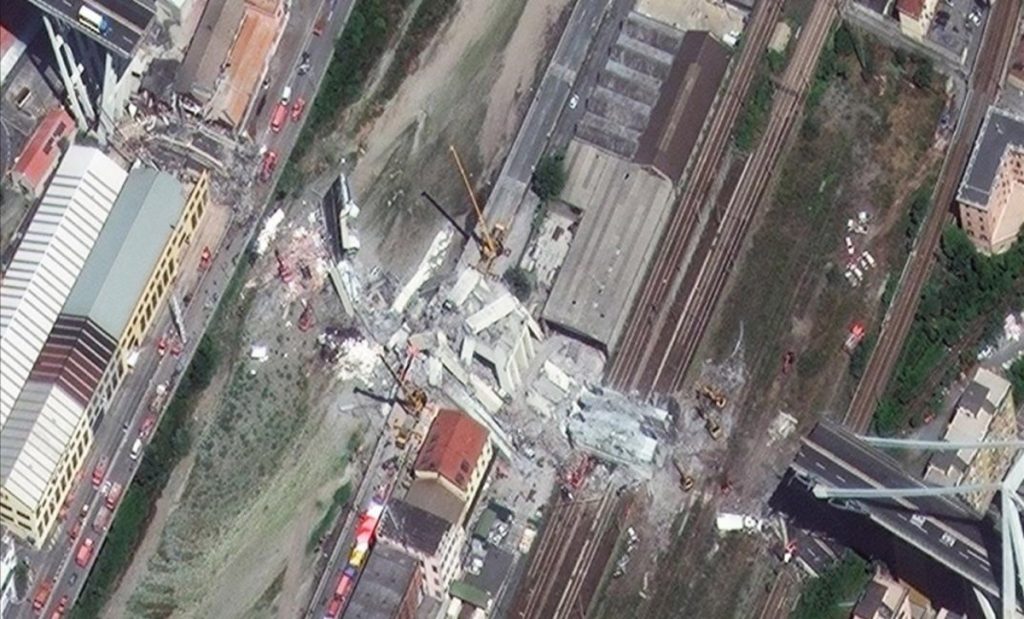 Doing a small analysis of the images can be observed, without making any detailed examination, as the area under the bridge has a very low integration, if not almost null with the surrounding territory. This is where the role of the engineer comes in, who has to assert his knowledge and explain to the promoter of the work that this is bad practice and that it is not going to bring any benefit to the city and this is exactly what was not done and what produced the subsequent consequences mentioned.

Luckily, we are in a time of change, in which awareness of these territorial malpractices is growing, either on its own or due to catastrophes of this kind. Specifically, the president of the Italian region of Liguria, Giovanni Toti, announced that at the end of 2018 houses would be given to the 311 families that have had to be evicted since the buildings under the viaduct will no longer be habitable.

It can therefore be said as a conclusion that this type of incident represents a turning point in society, given that, although it is true that there is a gradual awareness of these territorial issues, this type of disaster accelerates this process and consequently decision making. In addition, another of the few positive things that can be extracted from this is that the civil engineer himself is the one who becomes more aware of these facts, given that he reminds him that, like a doctor, in our profession there are lives at stake and it is our duty to ensure that we do a good job, given that no matter how simple it may seem, it must be done with rigour and judgement, since the slightest mistake can have harmful consequences.