The steel forest is the icon of a building intervention that was constructed at the bank of the river Jucar in the city of Cuenca, which was intended to regenerate the area and create an space for different activities. Its main mission was to recover the natural area that was unattended and create a place of leisure of reference.

Since the completion of the construction, this building had never a certain function. It is conceived as an object building, a kind of great sculpture that enlarges the city and attracts tourism. This steel forest is an example of architectures in where the form and signature are over function prevail. The project of the same one was carried out by the prestigious study of architecture Moneo- Brock having approximately a cost about 7. 7 00.000 €. The architectural space created has a total area of more than 3,700 m2. Its construction began in 2007 and its inauguration took place already in the year 2010.

The idea of making this building as a closed square did not finish working, so, they began to pose it as a space for fairs. Then, some fairs of little reputation were realized in, and they did not have much success. Nowadays, this space is in disuse and even became occupied. It is a clear example of municipal mismanagement, of waste of public money, which has left an abandoned structure, a kind of ghost that shows what should not be done in municipal politics. When this building had being constructed, it was also expected to build some other constructions, like residential buildings, but this was never done. From an architectural point of view, this construction has an important value; however, the reduced population density could explain the difficulties to be able to give an everyday use to this steel forest.

Another key factor that explains the failure is found in the constructive characteristics of the building. They commit it a lot in terms of its viability. It is a building consisting of almost all glass and steel. This results in technical characteristics that are harmful in different areas. Its climatic characteristics make it very difficult to maintain it in the right conditions of comfort and, as for the acoustics of the enclosure, it is impossible to carry out conferences and concerts it disables it for many uses.

The Steel Forest of Cuenca has a twin brother located in Grüningen, a small Swiss town of just over 3,000 inhabitants. The structure whose design is very similar to that of Cueca, is located inside a botanical garden and has been designed as a greenhouse, designed to harmonize with the nature that surrounds it. It is a pavilion of 180 m2 built in 2012, two years after the inauguration of the one in Cuenca. Despite their conceptual similarities, the fate of both architectural brothers has been very uneven. While the Swiss forest has become a space full of life, with prestige among neighbours and visitors, the Cuenca is in an absolute state of abandonment eight years after its inauguration.

The big difference between both projects and that could explain the disparity in terms of their success as a project could be in the environment of it. The initial draft of the Forest contemplated a large urban park on the banks of the Júcar, cleaning up this degraded area of ​​the city. In the middle would be the Forest of Steel, a building that would give service to this new piece of city. The economic crisis halted the construction of houses in the west and also the culmination of this great project. In the middle of nowhere, there was a modern structure that, has no function.

From the City Council, they indicate that putting back in operation the construction,  would cost around 300,000 €; it would be also necessary to add another important amount of money if we wanted a reform of all its surroundings creating an urban park that lodged it; but for the moment they have not found any purpose for the building that allows their tranquilization . It is in the hands of the city hall to find a function for the pavilion in such a way that performance can generally be the great investment that was made in its day. 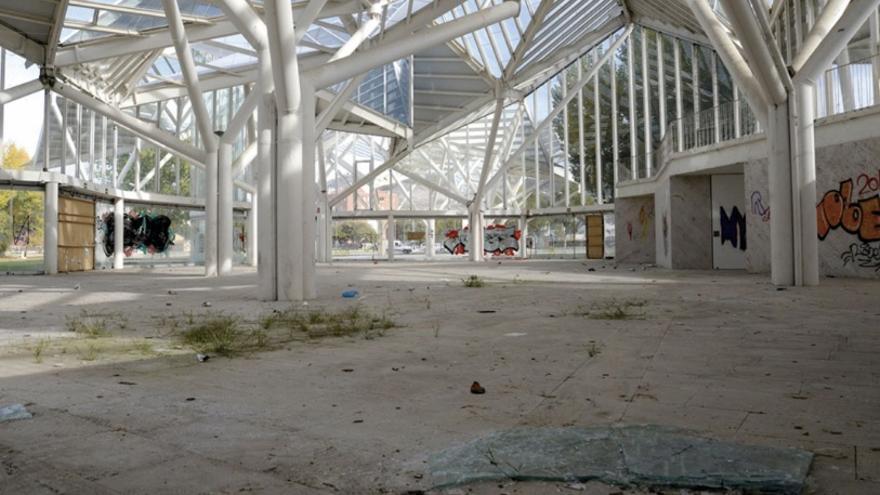 In the image you can see the current situation of the Forest of Steel, abandoned and graffiti, has been obtained from the newspaper Eldiario.es ( https://www.eldiario.es/clm/Cuenca-Abstracta-turistico-Bosque-Acero_0_581991871 .html )