The A-5 or Southwest dual carriageway (E-90 in the European Network) is one of the main roads of the territory of Spain, being the main connection link of its capital with Portugal, through the autonomous community of Extremadura, until it merges in the Portuguese analogous dual carriageway. It was built in the ‘80s and ‘90s, reconverting the national road V (carretera nacional V) or Extremadura road.

Its route in the Community of Madrid entails the passage through important localities such as Alcorcón, Móstoles, Villaviciosa de Odón, Arroyomolinos or Navalcarnero, among others. However, focusing on the section located within the municipality of Madrid (with an approximate length of 10 km (6.2 mi), 2 (1.2) of which run through a tunnel built next to the rest of the intervention called "Calle 30"), this dual carriageway crosses the neighbourhoods of Cuatro Vientos, Campamento, Las Águilas, Aluche, Lucero and Puerta del Ángel (between the neighbourhoods of Campamento and Las Águilas there is the stretch known as “cuarteles de Campamento”, since it is surrounded by abandoned military bases and quarters). It is right here where we find ourselves with a problematic situation of coexistence with the roadway quite relevant for the residents of the district of Latina along about 3.5 km (2.17 mi). 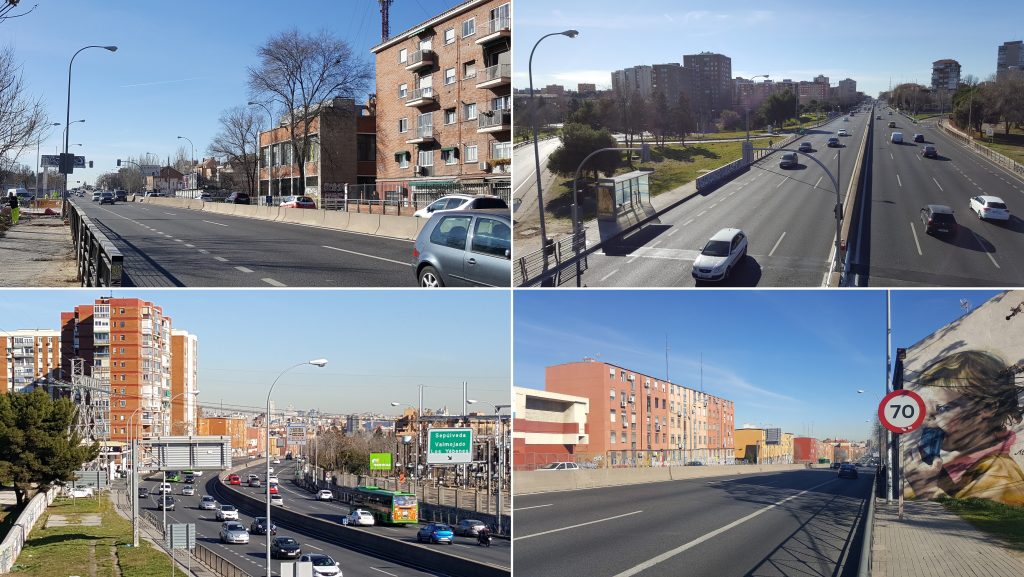 This section belongs to what is known as the Paseo de Extremadura (Extremadura boulevard) and supports an annual average daily traffic of approximately 120,000 vehicles. Until the ‘60s, the road lived up to its name: trees on both sides, sidewalks of a certain width, tram stations, etc. However, with the start-up of the National Highways Program of Spain (Programa de Autopistas Nacionales de España), the construction of the national road V (N-V) was started up to what it is today: a 3 or 4 lane dual carriageway with a limited to 70 km/h (43.5 mph), with narrow sidewalks and underpasses. In addition, the roadway is embedded between the facades of the adjoining buildings (about 2 m (6.6 ft) away in the closest areas), which greatly limits vehicle access, complicating and making such manoeuvres dangerous.

All this has meant that the living conditions in the area have suffered a serious deterioration ever since: from murders and rapes in the underground walkways of the section, to serious noise and pollution problems that penetrate the adjoining houses; including the important barrier effect that produces when connecting different areas of the district on both sides of the roadway, limiting the economic development of the shops, as well as the different urbanistic endowments available to the neighbourhoods. An example of unsustainable mobility. 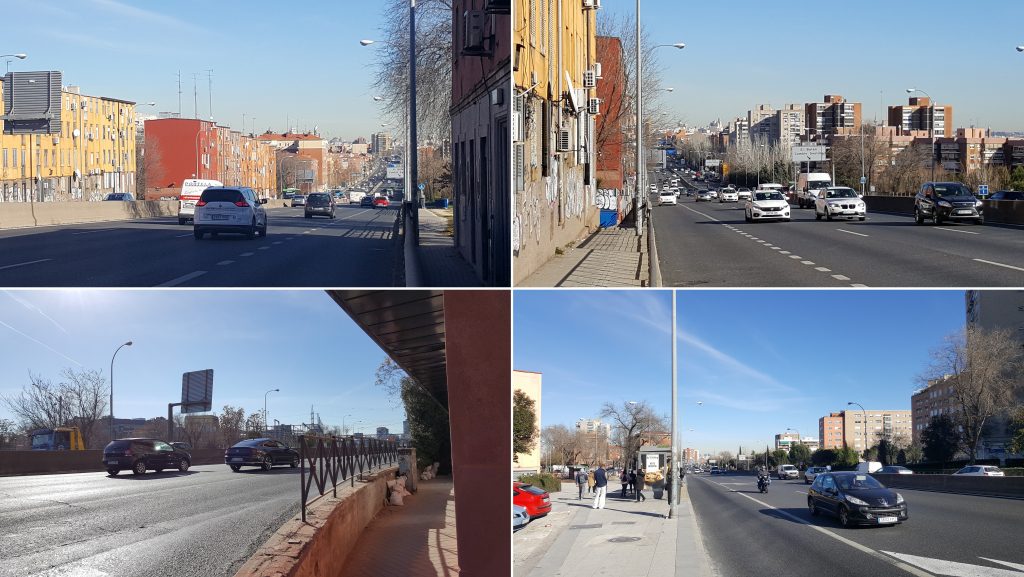 This situation has been a constant neighbourhood struggle since 2004, moment in which the dual carriageway came to be considered an urban road. Different associations of those affected have aimed at transforming what has been considered as part of a dual carriageway during the last decades into an urban boulevard as it was in its early years. Among the conditions that should be met to transform this road into a boulevard, there were traffic lights along the section, the implementation of pedestrian crossings, the improvement of accesses and connections with the surrounding streets, the creation of cycle paths and bus and HOV lanes, the expansion of sidewalks, the installation of urban equipment, the calming of traffic through speed detection devices and the redesign of the street hierarchy, among others.

It should be noted that, prior to the transformation of the A-5 into an urban road, other more complex options were also considered when solving the problem in the past. Of all of them, it is worth highlighting the repeatedly unsuccessful Operación Campamento (Campamento Operation), whose implementation involved the demolition of all lands owned by the Ministry of Defence, the construction of thousands of publicly protected and freely-acquired homes, as well as a complete planning and surface redevelopment of the surroundings and the definitive burial of the roadway, until its connection with the current stretch of tunnel under the avenida de Portugal (avenue of Portugal) belonging to Calle 30. Another noteworthy option refers to the bypass tunnel project that was intended to connect the A-5 with the M-30, from Batán to the Vicente Calderón stadium’s vicinity, running under what is known as the Cuña Verde Latina (Latina Green Wedge), as a supplementary method to the remodelling works of the M-30 and Operación Campamento, budgeted at more than 600 millions of euros.

So, in 2016, the proposal to reform the Paseo de Extremadura was approved by the City Council of Madrid. This reform in phases includes solutions such as installing a radar in the exit direction (where houses are closer) limited to 50 km/h (31 mph), improving access to the boulevard, as well as to the adjacent resting areas and the creation of two new intersections at the same level regulated by traffic lights (from the road of Boadilla and from the avenida de -avenue of- los Poblados). In addition, in the future, a bus and HOV lane is planned, as well as the construction of new dissuasive car parks (currently paralysed plan) and the reinforcement of the interurban public transport service. All of this has as its primary intention to provoke a deterrent effect when using the private vehicle in this section, diverting potential traffic through other routes.

However, there is some controversy regarding the possible consequences that the modifications to be made may imply. In the first place, users of private vehicles in the affected municipalities (Alcorcón and Móstoles, above all) do not have an alternative route sufficiently viable to access the M-30. Given this circumstance, it is questioned that the traffic signalling of a road so relevant to the southwest metropolitan area will mean an improvement in traffic conditions and not a simple change in the location of the problem or a worsening (Madrid has a serious problem of territorial imbalance, referring to the focal points of generation and attraction of trips). It is still early to decide if the measure can be understood as a good or bad practice. Only time and citizens will tell.