Matrera Castle is qualified as a Heritage of Cultural Interest and is located in Cadiz, in Villamartin. It is located on Mount Pajarete, about 520 meters above sea level, and its construction dates back to the ninth century. It is part of what was once a fortress and Muslim settlement.

The castle was a strategic point that has been under different domains, various disputes and sieges between the ninth and fifteenth centuries. He has been under Muslim control, and has been reconquering twice by Fernando III de Castilla in the twelfth century and later by Alfonso XI in 1341.

The castle was formed by a wall of 500 m long. This wall had some defense towers and two gates for the access. It has not been preserved much until today. Practically the only thing that has been preserved is the main defense tower. In addition, the dome and part of the tower in 2013 collapsed due to poor maintenance and structural problems that entailed.

Was in 2011 when the government of Andalucía decided to study its preservation and restoration because there was risk to rollover. But he did not get enough support to preserve the castle and was the landowner who decided to carry out the project himself, paying the expenses of this important investment. This project was awarded to sevillian architect Carlos Quevedo, who began the studies and research in 2011, start working in 2014 and completed in the beginning of 2016.

This restoration process has been very controversial, getting criticism from all aspects but also positive evaluations and takes the attention of major newspapers and media as The Guardian or The New York Times.

The restoration carried out by Carlos Quevedo and his team has been widely criticized by other architects, restorers and historians, who came to compare it to the restoration which was made of “Ecce Homo” Borja in 2012 by Cecilia Giménez. However, not all have been critical, it has also been nominated for the A+Architizer awards of New York, winning the first prize in the category of preservation.

As we can see, the restoration work has been to raise the side walls of the Castle Tower Matrera, to its original height. It has been done with the remains of the original materials and coated with white mortar, which looks much more striking than the original could be.

To ensure the stability, in reinforcements and inner cores, they have used the same rock that had been detached is used. The top section is executed to consolidate parts that had collapsed. All edges, perfectly marked, show the original volume of the tower.

This tower is visible from afar, so it is on the top of the hill, and that is why the building has an important scenic and historical impact on the site. Regardless preferences, it’s obvious that the white color used stand out the attention and doesn’t agree at all with the colors of the area in which it is located. That produces an impact on the area, landscape and visual impact. So if they had used at least tonalities similar to the next area, this would not have been so striking.

However, we have all kinds of opinions, and that is why the architect Carlos Quevedo and many people defend the use of this material and color to stand out on the original elements of the tower, and are based on they had found elements the tower with these colors. Also from another perspective, the author argues that this project aims to look into the future to restore the potential of the historical unity and keep on the original aesthetic.

There is no doubt of the wide polemical restoration by Carlos Quevedo and his team of architecture. Opinions are mixed and contrary. Some people argue that it is unfortunate, disastrous and is a significant landscape impact to the area. But on the other hand, they said that the restoration has been done in accordance with current legislation and it represents a perfectly restored work, in which we can discern the restored parts of the original. Besides they argue that it deserves awards and recognitions like the one which has already won.

To be ending, from my point of view, I think this restoration, as sculpture, artwork or architectural element is fine. Really good. It is original, striking and I like how the ancient walls stand out of bright white cement. But I think as restoration and intention to preserve the heritage of antiquity, doesn’t meet its target. Also it causes a notable visual impact that could have been avoided by using other materials and colors, in keeping with the environment and building it with a less precise and accurate form.

Up to this point, the controversy of Matrera Tower, which, like the restoration of Ecce Homo of Borja, was used later as a tourist attraction and advertising, merchandising included. There are many opinions as tastes, and even more when it’s about architecture and design. And you, what you think of this practice? 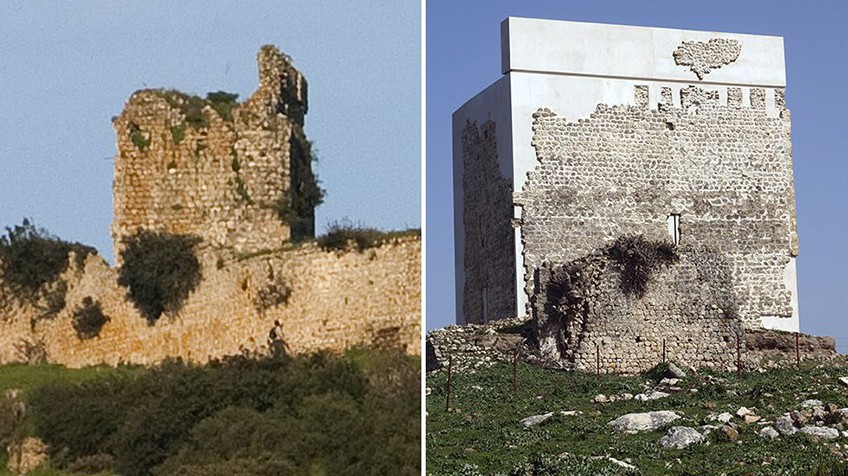