The day started with the usual breakfast in the cafe. Then, we attended a lecture with Mr. Alfonso Noriega, Economic Consul of Spain in Shanghai, about China-Spain commerce opportunities. This was so interesting and gave us a wide point of view of the Chinese economy, how it grew in the last years, from an exporting strategy, to a consumption strategy, and how relations between Spain and China are and are planned to be in the future. For example, we were told that 400.000 Chinese people visited Spain in 2015.

He also talked about the different business opportunities in China, from digital commerce, to Spanish food products commerce and how important startups are in this new “consumption” stage in China.

After this lecture, we went to have some noodles for lunch and make some project work. We worked in focus our idea to be sharper. But we didn’t have a lot of time to work because we all planned to visit the “propaganda museum” this afternoon.
We all met at the subway station where we took the line 10 and after a crowed time we went out to the street. Nobody was really sure about how to get to the museum so we started to walk guided by a broken map.
So we finally arrived at the museum after several laps, and discovered that it was in the basement of a normal housing building. Although it was only 5 minutes to close, we decided to enter upon finding out that it is a small museum and they would leave us an added time to see it.
The museum exhibits posters from the Maoist period of communist China, especially from the Cultural Revolution period. We found it very interesting as advertising is a political tool that has been used and is currently used. 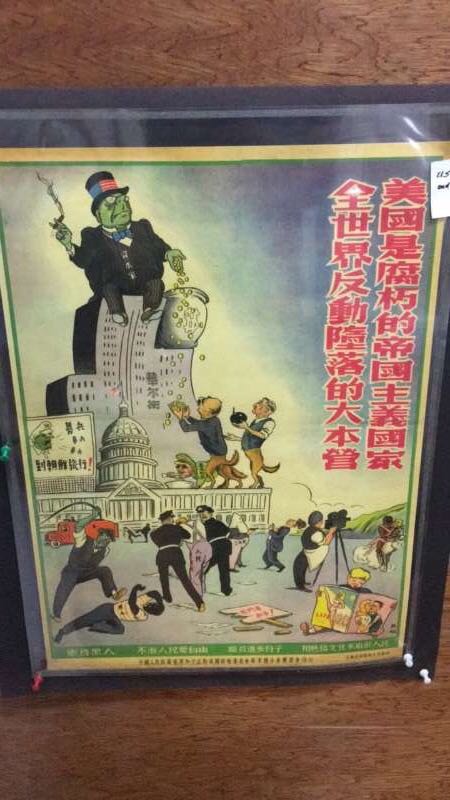 Perhaps it would have been well to make the visit with a specialist guide explaining each of the posters and their historical context in more detail. The visit to the museum ended in about half an hour, and some decided to buy merchandising as shirts, postcards or posters.

After the visit we went for a walk around the French concession, enjoying its streets, and ended up meeting in a bar, where we had a delicious hamburger and had a refreshing Belgian beer.
After this we walked a little more around this area and finally took a taxi to the Guesthouse, where we rest from the long day.