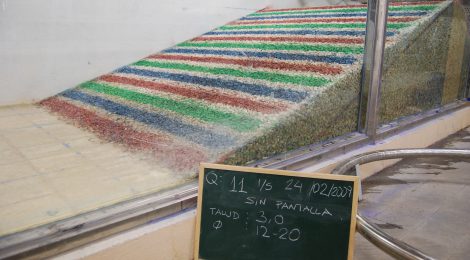 Nowadays, the new hydrological guidelines lead to design flows substantially higher than those used in the past in the design of dams. Additionally, our society is today more aware of the risks associated with a dam failure and requires a detailed analysis of the potential consequences of such an event including the evaluation of the failure hydrograph and floodable areas and the implementation of emergency plans. Embankment dams present numerous advantages regarding other typologies and are the most common constructed worldwide. Nevertheless, they are very vulnerable to overtopping events. The purpose of this research project was to study the initial phase of the failure of rockfill dams, in particular, the failure processes of the downstream shoulder related to overtopping.

This project was performed by the Dam Safety Research Group (SERPA) in collaboration with the Center for Hydrographic Studies of CEDEX and the International Center for Numerical Methods in Engineering (CIMNE). Physical models of rockfill dams were tested in the Laboratory of Hydraulics of the ETSI de Caminos, Canales y Puertos of the Technical University of Madrid and in CEDEX. The numerical modeling was carried out by CIMNE.

The aim of the investigation was to analyze how different parameters such as the rockfill permeability, the main geometric dimensions of the dam or the impervious element type affect the failure processes of rockfill dams, as for example the overtopping flows that initiate and complete the failure of the downstream shoulder of the dam (Qi and Qf), the failure mechanism, the advance of the failure (B) and how it progresses, etc.. For this purpose, tests with stepwise flow increments were performed varying the rockfill size, the height (H) and width of the dam (W), the downstream slope (N=H/V) and the type of impervious element.

The size of the particles was selected so that a nonlinear relation between hydraulic gradient and seepage velocity was assured. Uniform crushed aggregates of different grain size distributions were tested (D50 = 7 mm, 8mm, 12 mm, 16mm, 17 mm, 35 mm and 45 mm). During the test campaign, failure was analyzed for dams with no impervious element (SEI) and for dams with two different kinds of impervious elements: Upstream face (PI) used when the upstream rockfill shoulder was constructed and was modeled by means of a plastic screen placed over the upstream shoulder; Central core (CN) used when the upstream shoulder was not constructed and was modeled by means of concrete walls or by plastic screens placed over vertical metal grids. The physical models were tested for heights and widths varying from 0.20-1.0 m and 0.40-2.50 m, respectively, and for downstream slopes from 1.0-3.5. For more information about the tests, see the papers “Estudio de la Rotura de Presas de Material Granular Grueso Uniforme no Cohesivo sin Elemento Impermeable. Fase de Inicio” and “Fase de inicio de la rotura de una presa de escollera por sobrevertido“, both in spanish.

Depending on the slope, the failure can occur in two different ways:  Mass sliding for steep slopes where failure is observed to occur for all width of the downstream slope;  Particle dragging and formation of erosion channels for “stable” slopes, i.e. for gentle slopes.

In the paper “Overflow for the Complete Failure of the Downstream Shell of a Rockfill Dam” data was used to analyze the influence of these variables over Qi and Qf. The material size, reflected in its permeability characteristics, clearly affect Qi and Qf. The type of impervious element seems to have a minor effect over these discharges so, through flows produced by overtopping conditions or accidental leakage should not affect the overall failure process of rockfill downstream slopes. However, a more detailed analysis should be carried out. A stochastic model was obtained for both analyzed discharges. These formulations allow estimating Qi and Qf as a function of the permeability characteristics of the rockfill for a given dam characterized by its downstream slope and height.

The numerical modeling carried out by CIMNE aimed to validate a numerical technique for the simulation of the overtopping and onset of failure in rockfill dams caused by mass sliding. This goal was achieved by coupling a fluid dynamic model for the simulation of the free surface and through-flow problems together with a numerical technique for the calculation of the rockfill response and deformation. Both the flow within the dam body and its surroundings were taken into account. For more information about this numerical modeling, see the paper “Numerical and Experimental Study of Overtopping and Failure of Rockfill Dams “. 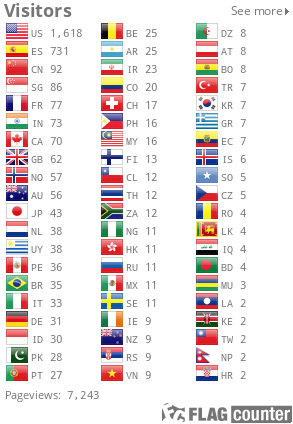